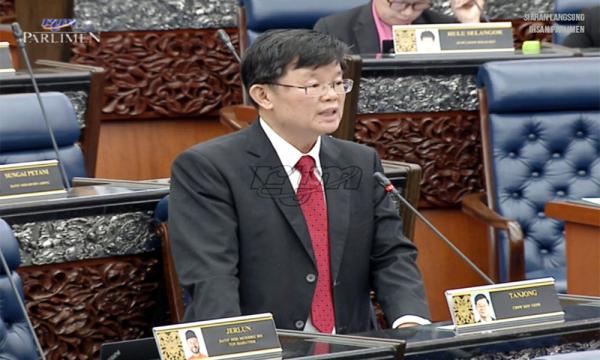 PENANG DUN | Penang created history today by limiting its chief minister’s tenure to two terms when the State Legislative Assembly passed the bill to amend the State Constitution to limit the term.

Chief Minister Chow Kon Yeow, when tabling the bill, said this was in line with the Pakatan Harapan manifesto in the 14th General Election that the tenure of chief minister and menteri besar be limited to two terms for good and transparent governance.

"Prime Minister Dr Mahathir Mohamad had recently brought up the matter in the Dewan Rakyat as a measure for Pakatan Harapan to speed up the political system’s reformation.

"In line with the federal government’s direction, the Penang state government has given priority to this aspiration in fulfilling the Harapan general election manifesto.

"Penang will once again create history by being the first state to exercise the limit on the tenure of its chief minister to two years, thus bringing about a progressive political approach," he said at the state assembly sitting.

Chow said the proposed amendment to the Penang State Constitution was forwarded to the Attorney-General’s Chambers through the State Legal Adviser’s Office last June 11 and it was discussed in a series of meetings of the state executive council in July and August.

Earlier, when debating on the bill, Gooi Hsiao Leung (PH-Bukit Tengah) said the amendment clearly proved that the Pakatan Harapan government had fulfilled its promise in efforts to strengthen the country’s system of parliamentary democracy.

"I believe this proposal was made based on obvious reasons. Previously, during the Barisan Nasional government, we had a situation where the prime minister was given too much power, and the country’s whole administrative system was used to protect him from criminal investigations.

"On this day, Nov 16, it’s not just for Penang, as we are setting a fantastic example for other states too. We should appreciate the chief minister’s efforts. The chief minister has only held the post for six months, the seat is not warm yet but today, he has tabled the bill,” added Gooi.

Lee Chun Kit (PH-Pulau Tikus) had said that the amendment bill would enable new faces, especially from the younger generation, to hold the highest post in the state.

Meanwhile, the opposition chose to abstain from voting on the bill.

Mohd Yusni Mat Piah (PAS-Penaga), when debating on the bill, said: “The tenure for a post is not an issue because if the leader is qualified and capable, it should not be problem for him to hold the post longer in developing the country or state, provided there are no scandals.”