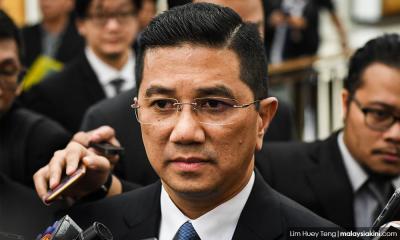 Azmin: No more political appointees with unreasonable pay at GLCs

This comes after Finance Minister Lim Guan Eng revealed that former Treasury secretary-general Irwan Serigar Abdullah earned about RM3.8 million from his various board member positions on GLCs between 2012 and June 2018.

“That has been decided, no more politicians to be appointed on any board. We want professionals to run our GLCs.

“But at the same we want the pay or the allowances to these board members to be reasonable because we cannot allow high pay to someone to run GLCs which belongs to the government.

“This has been done for the last few months,” he told reporters at the Parliament today.

The government’s decision to cut the salaries of GLCs and GLICs bosses was first announced by Prime Minister Dr Mahathir Mohamad in July.

Aside from the RM3.8 million, Irwan also earned more than RM2.9 million through his civil service from January 2011 to June 2018.

Irwan was charged today at the Kuala Lumpur Sessions Court, along with former prime minister Najib Abdul Razak, to six counts of criminal breach of trust (CBT) amounting to RM6,636,065,000 of funds belonging to the government.