The manifesto is why Harapan is in power

MP SPEAKS | The phrase ‘Malaysia Baru’, synonymous with events that transpired on May 9 this year, is growing more and more popular by the day, thanks to the many transgressions of the previous government coming to light which Malaysians are slowly coming to terms with.

In the same way that Barack Obama promised change which led to his historic victory in the 2008 US presidential election, his successor promised to make his nation ‘great again’ some eight years later, implying that that change promised by his predecessor somehow needed to be changed again.

It is nearly always the case that a desire for change inevitably involves a comparison of one state with another, from wanting to get fit to toppling a corrupt regime.

It would be wise to remember what ‘Malaysia Lama’ was, so that the same mistakes of the previous regime are not repeated.

Hence the importance of the Pakatan Harapan manifesto, which outlines what changes are needed to put Malaysia back on track again, reminding us of what ‘Malaysia Lama’ was.

‘Malaysia Lama’ featured, among others: a kleptocracy which would have bankrupted the country sooner rather than later; a culture of corruption in nearly all aspects of government; an education system and judiciary in dire need of reform; a major brain drain problem; an abuse of various draconian laws to stifle dissent; and a serious lack of press and media freedom.

To say that the manifesto was drafted without expecting a victory in the 14th general election begs the question: what would the manifesto have looked like if we really did expect to win?

In my view, the reality of it is that the victory of Harapan in GE14 was not surprising. The previous BN government had been on the decline since 2008, culminating in its loss of the popular vote in 2013. Harapan's victory in 2018 was simply a continuation of that decline.

No doubt, some of the promises made in the manifesto cannot be carried out at this time, or if at all, given the many new discoveries of the previous government’s mismanagement of the country which are only coming to light now.

But those discoveries are by and large mainly to do with the mismanagement of the country’s finances by the previous regime.

Before GE14, we did not know the severity of the country’s debt, which is said to be in excess of RM1 trillion, but we did know that the prime minister's powers were manifestly excessive, and outdated archaic laws such as the Sedition Act 1948 were being abused by the powers that be and needed to be abolished.

We knew that reform of key institutions was sorely needed and that the judiciary had long lost its aura of independence in the eyes of the public and required a drastic overhaul if it was to gain some semblance of its glory days.

As such, it is understandable if the government is forced to impose taxes or delay the abolishment of tolls to revive an economy that is still recovering from the assault of a kleptocratic government, but it is quite another thing to ignore other aspects of the manifesto which promise greater accountability of the new administration merely on account of this being a surprise victory for Harapan.

For instance, Promise 12 assured voters that the new Harapan government would introduce reforms that limit the excessive powers of the prime minister and limit his/her term to two. Promise 27 guaranteed the abolishment of draconian laws such as the Sedition Act and the Printing and Publications Act 1984.

Why is it so difficult to implement them?

The implementation of such promises is certainly possible and should be expedited rather than delayed, as any hint of procrastination on the part of the government to do so will look as though it is bent on continuing the abuses of its predecessor, much to the detriment of the rakyat who voted for change. 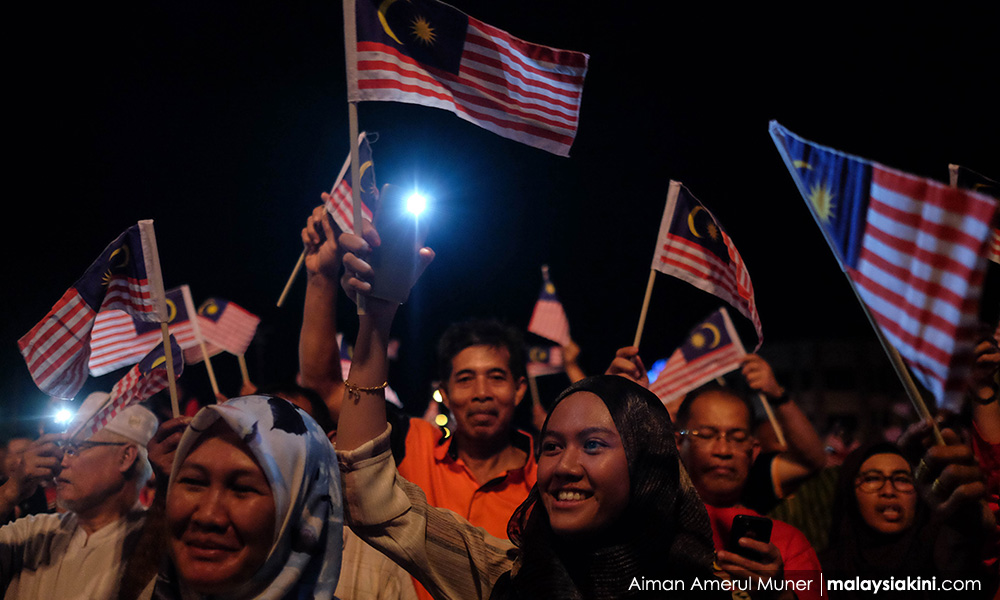 ‘Malaysia Baru’ should not be mere lip service, but a serious commitment towards a better Malaysia. It must necessarily reflect a strong political will on the part of the government to reverse policies and legislation that threaten the very fabric of a democracy and in turn, the progress of a nation so drained of its true potential due to the greed of an elite so detached from the everyday grouses of the ordinary man.

I agree that the promises in the manifesto are not cast in stone, but those promises cannot now be seen to be a burden either as they are the reasons Harapan is in power today.

People of all races had one thing in common in GE14: a desire to get rid of BN. The promises we made to them gave them the confidence that we would be different from BN. We cannot compromise on honouring promises in the manifesto which can easily be fulfilled.

If we fail to honour such promises and undo the damage done by the previous regime and worse still, make excuses for such failure such as not having expected a victory in GE14, it is likely someone will come along five years from now and succeed in convincing the rakyat that there is a need to make Malaysia great again by removing Harapan.

RAMKARPAL SINGH is the MP for Bukit Gelugor.