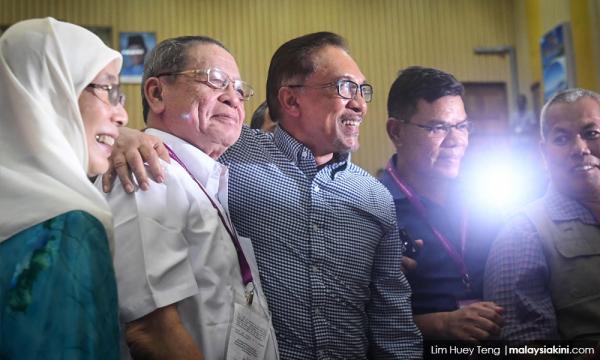 Party secretary-general Saifuddin Nasution Ismail said it was a sweet victory because Anwar “conquered” all the five state constituencies within the parliamentary constituency.

“In the last general election, we won in Chuah, Lukut and Sri Tanjung and lost in Bagan Pinang and Linggi, because the Malays reportedly did not support Harapan, but today we also won in those two places.

“That’s why I regard this victory as sweet, because the people from among the Malays, Chinese and Indians have sent a clear signal to the whole country, in fact, the world, that they want Anwar as their representative in Parliament,” he said in a speech in Port Dickson.

Negeri Sembilan Harapan chairperson Aminuddin Harun said history was made in Port Dickson and the people wished to see a change.

“There is no corruption and abuse of power. I hope that with this history created, we can move forward with greater transparency. The leaders must also work harder,” he said.

PKR communications director Fahmi Fadzil said Port Dickson voters have responded positively and proven this with the bigger majority of over 23,000 – almost 6,000 votes more than that secured in the last general election.

“It is clear that the people of Port Dickson want Anwar as their representative. It can be said that seven out of 10 people support him,” he said.

DAP veteran leader and adviser Lim Kit Siang said Anwar’s victory showed that the people’s support is not only for him as the MP for Port Dickson but also as the eighth prime minister.

“It is also support for the efforts to build a New Malaysia. The huge majority obtained by Anwar also shows the strong support of the people for him,” he said.

Former Port Dickson MP Danyal Balagopal Abdullah, who had resigned to enable Anwar to contest the seat, said he was happy with Anwar’s victory, and would work with him to ensure the welfare of the constituents and development of Port Dickson.

“When he won with a bigger majority than mine, it reflects the people’s support for him, our next prime minister.

“We have also proved that the critics who said Anwar was contesting here purposely for a personal motive were wrong. We wanted Anwar to win so that he can demonstrate his capability,” he said.

Permatang Pauh MP Nurul Izzah Anwar said the victory is for the rakyat and she thanked the people of Negeri Sembilan, especially the constituents of Port Dickson, for having given her father the mandate.

Harapan retained the Port Dickson parliamentary seat when Anwar beat six challengers in the by-election, securing a majority of 23,560 votes.

Shafie said the win was expected and although the percentage dropped in the number of votes, Anwar still won with bigger majority.

“This is a victory for Harapan and the Sabah government will always be prepared to cooperate with the ruling coalition at the federal level, and to strengthen the direction for the formation of a new Malaysia,” he told reporters in Kota Kinabalu yesterday.