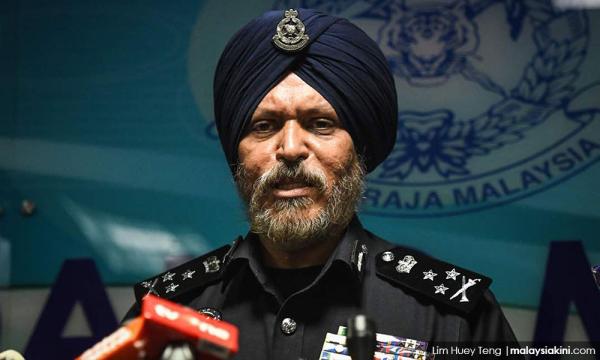 This came after Amar had denied the allegation by the UK-based blogger that police stole RM43.3 million during raids of apartment units at Pavilion Residences in Kuala Lumpur, which were linked to former premier Najib Abdul Razak.

The police chief, who called the allegation "baseless", then challenged Raja Petra to lodge a police report on the matter and not "hide behind a cyber curtain."

In his response to Amar on his blog, Raja Petra made references to Amar's turban, including that it was "too tight."

Amar expressed his surprise over the blogger's comments on Facebook, stating: "...when RPK (Raja Petra) snaps back with a demeaning and derogatory statement to ridicule a person due to race, whatever respect left is lost, because 'racist and discriminatory remarks are the weapons used by the weak...the maximum of hatred for the minimum of reason'.

"The Sikhs hold the turban to very high regard, don’t ridicule and try to undermine us (sic)... We have a much stronger grit and courage in us."

Amar, who had previously called Raja Petra a "mercenary writer," noted that the blogger had responded by saying that "everyone" was a mercenary.

"But even if one is such, as a writer the least he can do is have the morals and integrity to write about the truth.

In his Facebook post, Amar signed off as "Sikh Sardar", which refers to a 'complete' Sikh man who wears the turban.

Raja Petra had published a blog post yesterday titled "Amar Singh's turban must be too tight."

The article read: "Amar Singh Ishar Singh’s turban must be too tight that it is restricting the flow of blood to his brain".

Amar is overseeing the 1MDB investigations, regarding which Najib is facing 25 charges of money laundering and abuse of power.