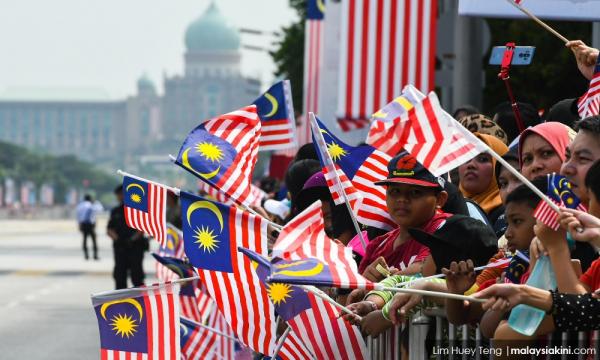 Understanding the roots of Malaysia

COMMENT | Roots, the historical novel of Alex Haley, was the standard bearer of how strong investigative research, written in plain language, could help Americans from all walks of life understand the hodgepodge nature of the United States of America; especially through the lens of slavery, the exploitation of African-Americans, eventually, the rape and plunder of Africa, too.

Roots, which was made into a wildly popular TV series in the 1980s, exposed the physical and psychological wounds of the United States.

Within the context of the printed word, the closest Malaysian equivalent of Roots would be Ownership and Control in the Malayan Economy written by James Puthucheary, The Myth of the Lazy Native by Syed Hussein Al-Attas, The Malay Dilemma by Dr Mahathir Mohamad and The Asian Renaissance by Anwar Ibrahim, all which were written at different times in Malaysian history, to push the country along.

While these were not made into any movies or TV serials, they energised an entire generation of students and policy works in the country. A healthy discourse on Malaysia was spawned, both within the country and abroad.

One might even add, The Malaysian Islamic Party PAS 1951–2013 by Farish Noor and Chinese Politics in Malaysia: A History of the Malaysian Chinese Association by Heng Pek Khoon; indeed Malaysia's Political Economy: Politics, Patronage and Profits by Edmund Terence Gomez and KS Jomo, all ought to be applauded in the same spirit–as well as the work of Malaysiakini, Malaysian Insight, Sarawak Report, and many other posts in Facebook and social media that helped Malaysians see the light.

Each of these authors took a jab at either exposing the hypocrisy of the colonial master, the falsehood of the weak social caricature (masqueraded as the truth), and the importance of speaking truth to powers that be. Not surprisingly, the Pakatan Harapan was the first to challenge and remove the Anti-Fake News Act of 2018.

Indeed, Australian academic Deborah Johnson likes to point out that it is not the scholars and politicians who shape the discourse on Malaysia but upstanding chroniclers of Malaysia like Munshi Abdullah, Abdul Rahim Kajai, Abdul Samad Ismail, even exceptionally talented poets like Usman Awang and Latiff Hussein. Without their wits and written prose, the streams of consciousness that formed Malaysia from different racial or religious silos would not have emerged.

If anything, Malaya did not achieve its independence based on the return of the colonial authorities of Britain to Malaya after the failure of the Malayan Union in 1948.

But Malayans from all walks of lives gained it by asking the British to look squarely at their own shortcomings as the administrators of the land.

First, they could not hold back the onslaught of the Japanese Imperial Army in 1941, and secondly, they made little or no effort to defend Malaya, for that matter, Singapore, and the two Borneo states – even when the people looked to them for redemption.

With a cluster of leaders whom you cannot trust, why would it be sensible to retain them at the top for perpetuity? It would be far more dignified if they left in peace. Merdeka achieved latter, by politely asking them to relinquish their duties one after another.

There was no war nor eviction but a steel will to restore the good standing of Malaya by asking the British colonial authorities to leave. In 1957, they did just that.

Tim Harper at the University of Cambridge averred that well before Malaya in 1957, however, there was a constant tug and pull of what made Malaysia.

KS Jomo, back in the 1990s, once spoke of the importance of concepts like Rukun Negara, the National Economic Policy and Wawasan 2020 to add to the potential thrust and trajectory of a new country.

Without these templates, there were no policy frameworks to guide the social reconstruction of Malaysia at all, since the Constitutional courts of Malaysia were considered too subjective, resulting in or open to multiple interpretations that could be challenged time and again, as indeed they were.

A new Merdeka or a "new" Malaysia can be proud of the rise of the people on May 9, 2018. Against all odds, 82 percent of the 15 million voters came out to vote.

But Malaysians cannot be thumping their chests on the basis of one victory alone. Nor must they be unduly proud if they can contain and corner Barisan Nasional time and again, either through the exposures of 1MDB or other acts of financial malfeasance.

Such modus operandi would be too easy – as it would operate on the crude principle of a tell-all.

Whenever some issues crop up, immediately tell all, with the ostensible goal of pointing fingers at the culprits (of the past).

But tell-all politics would suffer from serious whiplash effects, too. For example, when politicians resort to a tell-all, such as with a growing national debt that is strategically solvable, Malaysians confuse the size of the problems with the hopelessness of the solution.

Secondly, when paranoia forms the background of the country, the citizens become more vulnerable to democratic manipulation, due to the sheer sense of fear.

Yet, if Merdeka were to have any meaning at all, it is the deliverance from this mind-numbing shock, which the past generation has ruined the hopes and opportunities of the many generations to come.

Yet, as can be seen, Mahathir has called for the Tabung Harapan to be stopped next month since the solution to reducing the national debt cannot come from every citizen emptying his or her pockets.

Public sector reforms can range from an austerity drive to the introduction of various government-backed debentures and bonds, sometimes extending to 30 to 50 years to offset the debt already incurred.

Thirdly, Merdeka cannot mean the "breaking of the chain" of colonialism within the context of Malaysia alone.

Rather, Malaysia must warn the world of the debt traps that they can get into, if they should borrow from another country with total abandon.

Regardless of Sri Lanka, Laos, Cambodia or far away Tonga, Malaysia must warn others of the systemic risks that they face when they keep taking development dollars without any seeming strings attached.

Finally, Merdeka cannot be self-incriminating. Freedom of speech and actions cannot lead to the freedom to indulge in all forms of bestial activities, which undermine the human spirit and form.

While the majority must exercise their rule well, to avoid the tyranny of the minority, the latter must not cast aspersions at others for not accepting the LGBT as the mainstream of Malaysia

Malaysia cannot be bending to the rainbow coalition of LGBT, for instance, when the votes of the people on May 9, were geared towards ridding the country of any traces of corruption and kleptocracy first.

Merdeka, in this sense, is a renewed construction and reconstruction along the fine principles of constitution, checks and balances, institutional forms and basic mores of human ethics, even Islamic mores and values, which must by nature be transcendental, race and gender blind.

Merdeka does not have to mean a free for all. For that would be to urge the country to embrace hedonistic excesses in another form; fresh from destroying the kleptocratic overdraft of the previous regime that drew no lines and saw no ends.

Do not do to others what you do not want others to do unto you. That is Merdeka in the truest sense. It is the roots of any independence movement. And, Malaysia has been exploring deeply at one.

Merdeka celebrations are always special. This year is more special than any other. As I watched the Merdeka parade, tears were rolling uninhibited to witness a real Merdeka happening right in front of my eyes. This is the testimony of the rakyat’s effort in liberating Malaysia from the clutches of kleptomaniacs that almost ruined this nation of ours. The only nation that we have.

RAIS HUSSIN is a Supreme Council Member of Parti Pribumi Bersatu Malaysia (Bersatu). He also heads the Policy and Strategy Bureau of Bersatu.