President Emmerson Mnangagwa urged Zimbabweans to unite on Friday after he was declared the first elected head of state since Robert Mugabe's removal from power, but the opposition leader insisted he had won and pledged to challenge the result.

Sounding a conciliatory note after six people were killed in a post-election crackdown by the military, Mnangagwa vowed to be president for all Zimbabweans and declared his rival Nelson Chamisa would have a vital role to perform in Zimbabwe's future.

He also said the army's use of violence in Harare after the vote would be investigated independently, although he also suggested he understood the resort to military force, remarking that police had been overwhelmed by opposition demonstrators.

The army's clampdown and opposition claims that the vote was rigged revealed the deep fissures in Zimbabwean society that developed during the four-decade rule of Mugabe, when the security forces became a byword for heavy-handedness.

In an apparent effort at soothing those rifts, Mnangagwa, 75, said: "To Nelson Chamisa, I want to say: you have a crucial role to play in Zimbabwe's present and its unfolding future. Let us both call for peace and unity in our land."

But Chamisa, 40, told reporters Mnangagwa's ruling Zanu-PF had authorised the army crackdown on opposition supporters because it knew it had lost the election, the first since the army removed 94-year-old Mugabe from office in November. 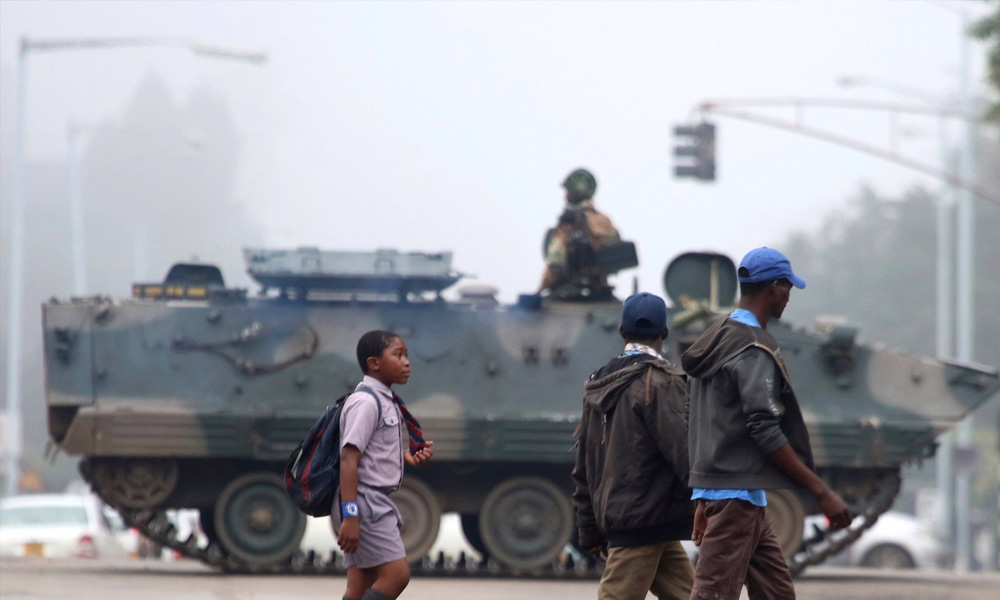 "We are going to explore all necessary means, legal and constitutional, to ensure that the will of the people is protected," Chamisa said.

Voting passed off relatively smoothly on the day, raising hopes of a break from a history of disputed and violent polls, but the violence in Harare darkened the political atmosphere.

He polled 2.46 million votes against 2.15 million for Chamisa, the Zimbabwe Electoral Commission (ZEC) announced in the early hours of Friday morning.

"This is a new beginning. Let us join hands," Mnangagwa said on Twitter. "We won the election freely and fairly, and have nothing to hide or fear."

His bid to repair the image of a nation known for repression and economic collapse was further hurt by a police raid on the headquarters of Chamisa's Movement for Democratic Change and the dispersal of journalists before a Chamisa news conference.

Mnangagwa won 50.8 percent of the vote, official figures showed, just over the 50 percent mark needed to avoid a runoff. The delays in announcing the presidential results and the narrow margin of victory fuelled the opposition accusations of rigging.

He now faces the challenge of persuading the international community that the army crackdown and lapses in the election process will not derail his promise of political and economic reforms needed to fix a moribund economy.

European Union observers said on Wednesday cited several problems, including media bias and mistrust in the electoral commission. Its final assessment will be crucial in determining whether Zimbabwe can return to the international fold.

Chamisa, who accused the commission of trying to rig the vote, said it should release "proper and verified" results. He told a news conference he would pursue all legal means necessary to challenge the result, which had serious legitimacy problems.

He declined to divulge the specific action that his party would take to challenge the election outcome.

Christopher Dielmann, economist at Exotix Capital, said the immediate priorities for Mnangagwa would be to continue on the path of restoring the economy and boosting exports, helped by international engagement.

"By many accounts, this imperfect election delivered sufficient transparency, especially in relation to past results in the country, that should allow re-engagement to occur relatively smoothly."

Charles Laurie, head of country risk for Verisk Maplecroft, said for international investors, Zimbabwe’s election was less about an MDC or a Zanu-PF win, and far more about electing a legitimate, stable and trustworthy leader.

"There is a bleak pall over Mnangagwa's win," he said. South Africa President Cyril Ramaphosa urged all Zimbabweans to accept the poll results.

Harare's traffic was thinner than usual. Water cannon and anti-riot police remained outside MDC offices, a reminder of the clashes between opposition and the security forces this week.

"We are not happy with this election but what can we do?" said Patience Sithole, a cleaner in Harare.

The Herald newspaper, which acts as a government mouthpiece, hailed the election as reflecting the will of the majority and admonished the opposition, decrying "a culture of rabble-rousing and sham protests of alleged rigging whenever a party loses."