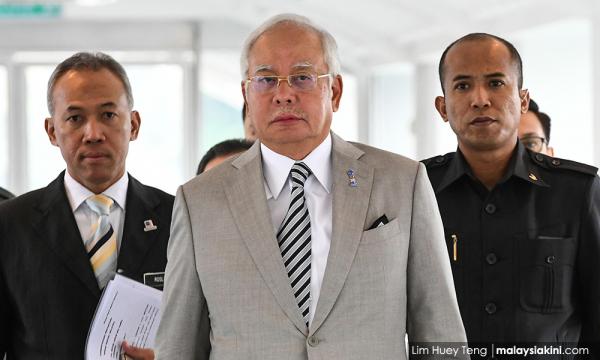 Is CIA letter why Najib said nothing when called 'kleptocrat'?

MP SPEAKS | The secret letter by the previous Najib Abdul Razak administration seeking help from the United States Central Intelligence Agency (CIA) in the 14th general election highlights the question why they had not protested or taken any action against the US attorney-general Jeff Sessions’ public condemnation of the 1MDB corruption scandal at an international forum as “kleptocracy at its worst.”

This was as good as an international indictment of the US government telling the world that the former prime minister was the “kleptocrat at its worst” on the world stage.

Can Najib be in Parliament tomorrow to explain why his government did not defend itself against the “kleptocracy at its worst” charge by the US government last December, but five months later – five days before GE14 – sent a secret letter to the CIA seeking support against Pakatan Harapan in case the election result turned out to be close?

The Persatuan Patriot Kebangsaan (Patriot) has described this secret letter – which was sent to the CIA on May 4, by Hasanah Abdul Hamid, director-general of the Research Division in the Prime Minister’s Department – as “treacherous and treasonable.”

Hasanah has been exposed as head of a powerful intelligence unit under the name of the Research Division, which is known publicly as the Malaysian External Intelligence Organisation (MEIO), with a staffing of some 300 intelligence officers.

Hasanah herself referred to MEIO in her letter to the CIA.

It was reported yesterday that South Korea’s ousted President, Park Geun-Hye, was given another eight-year jail sentence for corruption to the 24 years’ imprisonment for abuse of power and corruption which was handed down in Ápril.

This implies that the ex-president will now be serving 32 years in jail.

Can the same thing happen in Malaysia?

This will be a crucial test of the rule of law and anti-corruption political will in Malaysia.

It is pertinent that world literature on kleptocracy makes no reference to Park although Najib is cited, as in a search of kleptocracy in Wikipedia.

Will the 14th Parliament do justice to Malaysia’s good name and international standing damaged by the infamy, ignominy and iniquity of Malaysia regarded worldwide as a global kleptocracy?

This is one the greatest challenges of the 14th Parliament.