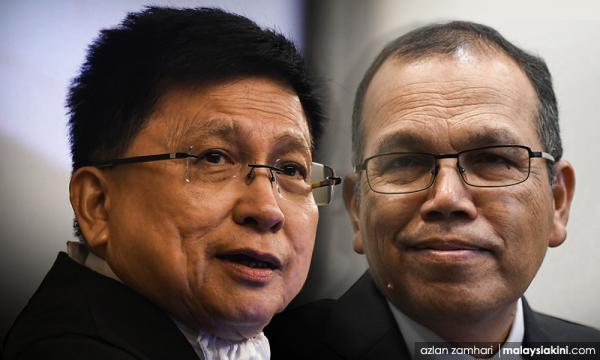 Are there now two chief justices in Malaysia?

COMMENT | In an article dated July 13, former chief justice Abdul Hamid Mohamad was quoted as saying that from 9.30 pm on July 11 up to midnight July 31, 2018, there are now two chief justices.

Abdul Hamid has raised a number of questions over the appointment of Richard Malanjum as chief justice of Malaysia on July 11.

Abdul Hamid assumes that the post-dated resignations of the ex-CJ and the president of the court of appeal (PCA), Raus Sharif and Zulkefli Ahmad Makinudin, respectively on June 7, 2018 are valid.

Did the Constitution give those two gentlemen the power to post-date their resignations to July 31, instead of obliging them to leave with immediate effect?

In resigning, both these judges had invoked Article 125(2) of the Federal Constitution.  It says: "A judge of the Federal Court may at any time resign his office by writing under his hand addressed to the Yang di-Pertuan Agong...".

There is no power in the constitution by which the outgoing CJ and PCA could dictate to the King when they were leaving. If that is the way Article 125(2) is construed, post-dated resignations violate the spirit of the constitution.

Abdul Hamid states that the process of “garden leave is not applicable to the CJ”.

That leads to the next question: How should the constitution be interpreted when it comes to the “two CJs” issue?

In the 1981 case of Ong Ah Chuan v PP,  the Privy Council ruled that constitutional interpretation should “incorporate fundamental principles of natural justice”.

Two points arise from the application of this principle.

First, the Bar Council had sued the outgoing CJ and PCA.  The Bar Council says their appointments were illegal.  It asks the Federal Court to decide on it. A decision on it is now pending.

A question that arises from these circumstances is: Are the outgoing CJ and the PCA men who wield power? Yes. They each were, at the time of their resignations, the head and deputy head of one arm of government – the judiciary.

The next question clears any doubt: Were they invoking a constitutional power to perpetuate the duration of their offices - and by consequence - their powers? The answer cannot be a “no”.

Next, by their exercise of that (non-existent) constitutional power, did they benefit personally? What do you think?

So isn’t the post-dating of their resignation prejudicial to the principles of natural justice? Who would say that the answer would be a “no”?

And so Abdul Hamid’s argument cannot be quite right.

Abdul Hamid then asks, “When did the JAC have its meeting?”

Now, he does not complain that they had not consulted the Conference of Rulers.

His attack is that the JAC has not been consulted. He assumes that in every case where a CJ has to be appointed, the JAC must first meet, and choose a candidate.

The first answer is that the prime minister is not constitutionally required to accept the recommendations of the JAC. This is because Article 122B states that “the Yang di-Pertuan Agong shall appoint the chief justice of the Federal Court, the president of the Court of Appeal, acting on the advice of the prime minister, after consulting the Conference of Rulers.”

The second answer to his lordship’s anxieties is found in the Judicial Appointments Commission Act 2009.

The JAC’s constitution is determined by section 5 of this act.  The commission has only nine individuals, including the chairperson. It is comprised of:

The important phrase in section 13(4) says that "the quorum (of the Commission in meeting)… shall be seven including the chairperson".

The chairman of the JAC is the outgoing CJ. The person who can replace him, as chairperson, is the PCA. But where the CJ is, for any reason, “unable to perform his functions”, the PCA shall act as the chairperson of the commission. This is based on section 8(1)(2) of the act.

But what happened on June 8, 2018? Both the CJ and the PCA resigned from their respective offices. Both had vacated their office.

So from that time forward, how was the JAC to function? It had no chairperson.  And his replacement had also resigned.  It had become comatose!

It could not act.

So the prime minister had a judiciary that had lost two of its leaders.

So what was he to do?

There is a legal answer.

Under the principle of “necessity”, it is entirely possible for leaders of the nation to act outside the four corners of the law, so long as it is in the best interest of the country. This concept was introduced by the medieval jurist Henry de Bracton,  an English Ecclesiastic and jurist in 1240.  William Blackstone, another renowned jurist, acknowledged and developed this principle in 1768.

That the King himself saw it fit to appoint the new CJ and the new PCA on 11 July 2018 demonstrates that the prime minister and the King were acting under the principle of necessity.

The long and short

When the King accepted the resignations of the outgoing CJ and the PCA on June 8, 2018, their offices ceased. The King did not extend their term up to July 31, 2018 - even though they asked for it - because even the King had no constitutional power to do that.

It also means that the King had impliedly dismissed both the ex-CJ and the ex-PCA.

Therefore, in my respectful view, the ex-CJ was not quite right when he said that “there are now two CJs”.

In law, the office of the Chief Justice had fallen vacant long before Malanjum had been appointed as chief justice of the Federal Court.

Therefore, Malanjum’s appointment as CJ was entirely valid, as is the appointment of Ahmad Maarop as president of the Court of Appeal.

GK GANESAN KASINATHAN is an advocate and solicitor.