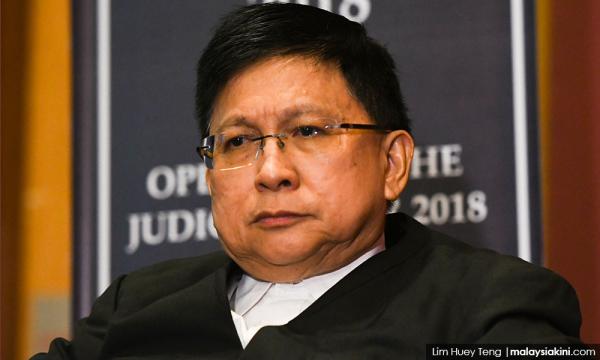 Chief Judge of Sabah and Sarawak Richard Malanjum took his oath of office as the new chief justice tonight.

He is the first person from the Borneo states to be appointed to the highest judicial post in the country.

Chief Judge of Malaya Ahmad Ma'arop has been elevated to the post of Court of Appeal president.

They were sworn in before the Yang di-Pertuan Agong Sultan Muhammad V.

Meanwhile, Justice Zaharah Ibrahim will replace Justice Ahmad as the Chief Judge of Malaya, and Justice David Wong Dak Wah will be the new Chief Judge of Sabah and Sarawak.

Chief Justice Md Raus Sharif and Court of Appeal president Zulkefli Ahmad Makinudin, who are supposed to retire on July 31, had been asked to vacate their post effective today, according to a source.

This came after as the Malay rulers had their conference beginning today.

Justice Malanjum, 65, is the first from the Kadazandusun community in Sabah to be appointed as the Chief Judge of Sabah and Sarawak and he was the youngest to be elevated to the Federal Court in 2005 at the age of 52.

He will reach the retirement age of 66 in October this year but his term can be extended for another six months, until April next year.

At present, Malanjum is the most senior Federal Court judge.

Earlier today, he downplayed speculation of him being nominated as the next chief justice.

Justice Ahmad, 65, who hails from Malacca, was appointed a judicial commissioner in 2000. He was elevated to the Court of Appeal in 2007 and then promoted to the Federal Court in 2011.

Last year, he became the Chief Judge of Malaya.

Justice Zaharah, 65, is the second woman to hold the post of Chief Judge of Malaya, after Siti Norma Yaakob.

She was appointed as judicial commissioner of the High Court in 2004, elevated to the Court of Appeal in 2010 and then to the apex court in 2015.

Wong, 64, from Sarawak, was appointed as a judicial commissioner at the Kuching High Court in 2005.

He was then elevated to the Court of Appeal in 2013 and became a Federal Court judge earlier this year.