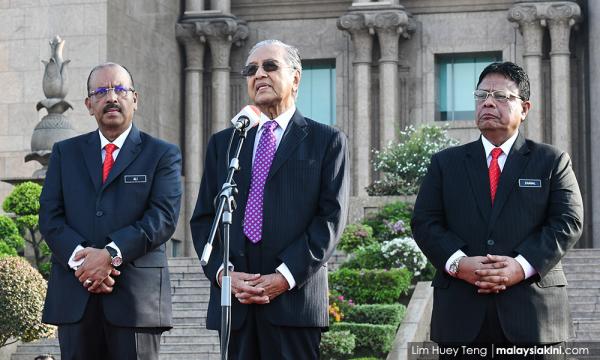 Prime Minister Dr Mahathir Mohamad today reminded administrators and civil servants not to use the power vested in them for personal gain and in the interests of their families and friends.

Addressing the monthly assembly of the Prime Minister's Department at the Perdana Putra Building in Putrajaya, he said it was important for every civil servant to practise noble values in discharging their duties.

"The power vested in us is not for us to accumulate wealth, but for the specific purpose of administering our beloved nation as best as we can, and we have the necessary abilities with the noble values of life,” he said.

The prime minister said, however, that people sometimes tended to forget their tasks when they were given the chance to do something.

"We are given the power not to enrich ourselves but to perform certain tasks. That is why we are in power. When we resort to malpractice, abuse our power, believe me, we ourselves will become the victims subsequently," he said.

Referring to the culture and values practised in developed countries, Mahathir said many of the people there and their administrators were industrious, trustworthy and diligent, and mastered knowledge.

"They also put into practice what they have learned and live a noble life, making it a part of their culture of living,” he said.

Mahathir said some countries were less developed because their people, especially administrators, did not adhere to noble values.

The prime minister said that though Malaysia would be unable to become a developed nation by 2020 as it desired, the country could still achieve that status because the people had the capability to realise that objective.

“What is necessary is sincerity, trust, diligence and effort, and the key is to be satisfied with our work, not with what we get,” he said, adding that to achieve the goal of a developed nation the people should not depend solely on prayers.

“We pray to God but our prayers must be followed with our action. If we only pray and do nothing, what we desire will not come flowing to us,” he said.