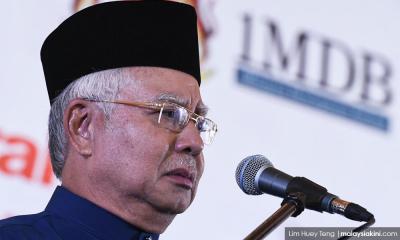 Former prime minister Najib Abdul Razak has denied blaming 1MDB's board of directors for the financial scandal which plagues the firm.

Referring to the Reuters' interview with him, Najib said that 1MDB's board had a duty and responsibility to advise him on the running of the investment firm.

"He did not at any time during the interview (with Reuters) say that the 1MDB board was to be blamed for what had happened.

"Najib will make a further clarification on this at the appropriate time," a Najib spokesperson said in a statement.

Reuters in its interview had asked Najib whether he blamed the board for 1MDB's troubles.

His reply as published was:

"No. I am saying as a general principle, if they are in the know that something is not right, then it is incumbent upon them to tell me [...] it is the fiduciary duty of the board and the management to do the right thing. I expect them to do the right thing and to follow the law.”

Najib in the interview also said he would have acted if he knew 1MDB funds were being misappropriated.

He also denied knowledge of 1MDB funds entering his personal accounts as alleged by the US Department of Justice (DOJ).

The DOJ claimed that Najib was the recipient of US$731 million of misappropriated 1MDB funds.