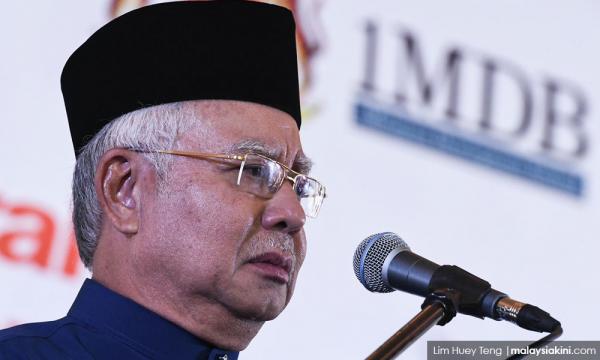 Yoursay: MO1, we may forgive you, but justice must be served

YOURSAY | 'Indeed, rule of law is not in the forgiving or forgetting business.'

Ex-PM urges rivals to forgive and forget to mark Aidilfitri

Anonymous 2436471476414726: Ex-PM Najib Razak, you have ravaged our country financially, economically, structurally, administratively, etc, and leaving mountains of debts for the rakyat and future generation to service. And you want the rakyat to forgive and forget?

We would not forget easily and as for forgiveness, only Allah can grant you that. The least you could do is to help return the allegedly stolen loot to the country immediately. Surrender all those assets locally and overseas to the Malaysian authorities as a start.

Also assist law enforcement in repatriating wanted personalities back to Malaysia such as Jho Low, Nik Faisal Ariff Kamil, Jasmine Loo, Casey Tang and a host of others. We are sure you know where and/or how to locate them.

Until you start doing at least all of the above, do not start preaching to us about forgetting and forgiving.

Hamster Huey & The Gooey Kablooie: Najib, I remembered how you showed your political opponents no mercy, arrogantly mocking and insulting them on camera during the GE campaign trails and glorifying your achievements using allegedly stolen rakyat’s money.

Instead of teaching us the path of righteousness, why don't you first ask forgiveness from Allah, then from your father and mother? Don’t you get it? You must be punished and be shown no mercy.

David Dass: The request for mutual forgiveness relates to what was said and done during the last elections. It does not deal with what was done by so many in the last government to the nation and to the people of Malaysia.

There is no reference in the statement to the vast amounts of money stolen through all sorts of devices from the government Treasury. Forgiveness for that requires restitution, before all else.

Vijay47: Najib, you played artfully to a rapidly diminishing gallery and almost pulled it off, except that when your newfound charitable inclinations are closely viewed, they are found to be lacking in a crucial element: sincerity.

Forgiveness is a gift to those who regret their actions, not to those who merely fear the consequences. For all your supposedly virtuous stand now, you have yet to express the least contrition for what you wrought upon an entire nation all these years. You have yet to even admit them.

You ask for mutual forgiveness, but what has the country done that warrants mercy from you? On the other hand, what you call upon us to reprieve you of is almost beyond human capacity and what makes your conduct all that much more reprehensible is the sheer arrogance and the misplaced assurance that you would never be brought to account.

That moment of never has now come home to roost. It is strange that having lost the elections a month ago, as the gallows are being readied, you now at Hari Raya speak of forgiveness, when at every one of the previous eight Raya occasions as prime minister such charity did not even flash past your mind.

You may yet enjoy forgiveness, Najib, but not from us. After all, to forgive is divine.

Anonymous 1802761448130592: If only you had said and meant your words years ago. How can we forget and forgive now when we are saddled with so much debts, scandals and mess?

The list goes on, and I wonder whether you would utter those words if you were still PM today?

CQ MUARku: Easier said than done, Najib. Just because you're no longer in power that you're pleading to others to "lay down their arms" and want Malaysians "to live in peace and harmony"?

Indeed, would you have said the same thing had Umno/BN won in the last election? Most definitely not.

You'd probably intensify your aggression and ensure all those who were your rivals and campaign against you to get rounded up by the police.

As such, enough of your hypocrisy with all those pathetic “advice”. Save your breath... the rule of law must continue; all those found guilty must be punished accordingly.

RM2.6 Billion Turkey Haram: Suddenly, Najib has a new-found wisdom - to forgive and forget. You should have thought of that when you had power.

You did not think of the days when you would lose power. Now that you are no more in power, please reflect on what you did to Dr Mahathir Mohamad.

You formed a royal commission of inquiry (RCI) on Forex losses, hoping to shame and blame Mahathir. Even though he might want to forgive you, the millions who voted for him would not.

ToGodtheglory: Najib, rule of law is not in the forgiving or forgetting business.

Abd.Karim: Yes, rule of law has no friends nor foes. Your level of corruption and abuse of power could have destroyed the multiracial fabric of our nation. Just imagine what would have happened to the rakyat if the abuse had continued.

The good people were detained and locked up while the lawbreakers happily went around creating havoc. It’s quite difficult to forgive and forget.

Vgeorgemy: To enable us to move forward, we need to provide the full disclosure on the alleged siphoning of the rakyat's wealth as a first step.

If this can happen, all will be forgiven and we can move forward as a single entity to build the nation for our future generations.

Gulengtu: Thanks to Najib for the mess he created, which made the rakyat more determined than ever to get rid of him.

Thanks for not wanting to step down when the opportunity was given, for if he did, today we would still be suffering under Umno corrupt system.