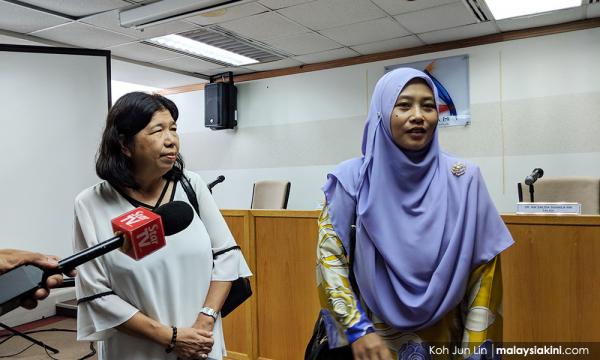 Since our husbands were taken from us on Nov 24, 2016 (Amri Che Mat) and Feb 13t, 2017 (Pastor Raymond Koh), we have waited anxiously, yet hopefully, for a breakthrough to pierce the wall of silence that has surrounded the investigations into our husbands’ disappearances.

On May 12, this breakthrough came as a late night knock on the door of Norhayati’s house in Kangar by an officer from the Royal Malaysia Police (PDRM). Burdened by remorse about his part in this conspiracy of silence, he confessed that both our husbands were taken extralegally in a police operation directed by Bukit Aman.

The officer is 38-year old Sergeant Mohd Shamzaini Mohd Daud a Special Branch officer based in Perlis. When asked why Amri was taken, he replied: “Because of Shia and forex”.

He alleged that Khalid Abu Bakar, inspector-general of police at that time, had knowledge about this operation. Shamzaini said he was a member of the PDRM Perlis team investigating Amri before his disappearance.

He claimed that while PDRM Perlis was not directly involved in the operation on Nov 24, 2016, that snatched Amri, his superiors in PDRM Perlis including ASP Razman Ramli, one “Mat Ali” of the Special Branch and the Perlis police chief Abdul Rashid knew about Bukit Aman’s involvement after the incident.

He also mentioned a Special Branch officer named Azam Azahari as being present during the operation to abduct Amri. Sergeant Shamzaini also told Norhayati that the team that took Amri was the same team that took Pastor Raymond Koh.

When asked why, he replied: “Because he ‘apostatised’ Muslims.”

Since May 12, we have done all within our power to expedite efforts to investigate this new lead including lodging a police report, providing information and evidence to the police and writing to the police.

In addition, Norhayati and other witnesses have testified under oath about this new lead at the ongoing Suhakam public inquiry into our husbands’
disappearances.

Norhayati also wrote to Muhyiddin Yasin, minister of home affairs. In her letter, Norhayati expressed her fear that the investigations may be tainted because of a possible conspiracy of senior officers in PDRM Perlis and Bukit Aman who may have authorised, supported, known or concealed information about our husbands’ disappearances.

She also pointed out that Sergeant Shamzaini would not be willing to testify truthfully without adequate protection or legal immunity as the content of his confession to her placed him at risk of self-incrimination and other pressures.

As feared, it appears now that Norhayati’s concerns were justified. At the Suhakam inquiry on May 30, PDRM produced a copy of a police report by Shamzaini admitting that he met Norhayati on the night of May 12 but denying he said that the police were involved in our husbands’ disappearances.

In this report, he states that such a disclosure would be injurious to him personally. We believe that there is compelling evidence that our husbands were deprived of their liberty by parties acting with the knowledge, support and/or concealment of the act by state actors and that this placed our husbands outside the protection of the law.

We believe our husbands’ disappearances are linked to religious issues, as is clear in a speech made by DCP Awaludin on Nov 6, 2016, where he claimed that the “Shia enemy” and Christian preachers are more dangerous than the terrorist group the Islamic State.

He complained that after the repeal of the Internal Security Act (ISA), current laws did not allow the police to detain such “enemies” without having to produce them in court.

As such, respectfully, we plead to your government to immediately and independently investigate these serious allegations with urgency, transparency and impartiality, especially because those allegedly implicated include high-ranking and powerful police officers.

We also plead to the Attorney-General’s Chambers to quickly provide a safe space for whistle-blowers to come forward with knowledge about our husbands’ abductions: who took them, where they are now and who were involved in this high-level conspiracy of silence.

We include Sergeant Shamzaini in this request for immunity, especially since his confession that night may well have exposed him to efforts to pressure him into silence or to retract his confession, as he seems to have done in the unsigned police report submitted by PDRM at the Suhakam inquiry on May 30.

Today marks one month since Shamzaini’s disclosure. In this month, we have not seen any effort by the government to ensure that this explosive disclosure is investigated by an independent team.

Worse, it appears that PDRM Perlis, whose officers are implicated in
these allegations, is in charge of the investigations. It has been 565 days since Amri was taken in Kangar, Perlis, and 484 days since Raymond was snatched off the street in Petaling Jaya, Selangor.

We are aware of the challenges your government faces in this transition period since the general election. However, your government is the one in power today: any delay in this matter could be seen by those inside and outside Malaysia as a breach in the rule of law and the denial of our husbands’ right to be protected under that same law.

Please help us find out what happened to our husbands, who took them and where they are now. We want them back with us. We beg for justice. We plead for the truth.

Editor's Note: Amri Che Mat disappeared on Nov 24, 2016 while driving near his home in Kangar, Perlis. According to eyewitnesses, Amri is believed to have been abducted after three dark-coloured SUVs forced his car off the road and he was forcibly taken.

Raymond Koh was abducted in the morning of Feb 13, 2017 while driving his car in Petaling Jaya, Selangor. CCTV footage from a house nearby captured the operation to abduct him, which involved three dark-coloured SUVs, two other cars and two motorcycles.

Suhakam is currently holding public inquiries to investigate whether the missing persons' cases of Koh, Amri, Joshua Hilmy and his wife Ruth Sitepu amount to enforced disappearances as defined by the International Convention for the Protection of All Persons from Enforced Disappearance (ICPPED).

The ICPPED was adopted by the UN General Assembly in 2006 but Malaysia is not a signatory.