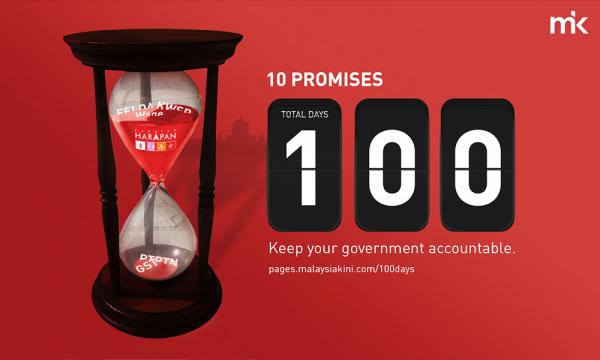 As part of their electoral manifesto, Pakatan Harapan made a pledge to fulfil 10 promises in their first 100 days in power if they were to capture Putrajaya in the 14th general election (GE14).

The new Harapan government under Prime Minister Dr Mahathir Mohamad has hit the ground running since its formation, making some big decisions such as zero-rating the Goods and Services Tax (GST) and scrapping the Kuala Lumpur-Singapore High Speed Rail (HSR) project.

Now that it has been a month since Harapan came into power, they have 70 days left to fulfil its 10 promises to the rakyat.

To hold the new government accountable to these promises, Malaysiakini has set up an electoral promise tracker to monitor the progress of these 10 promises within 100 days.

The tracker also has a link to the full Harapan manifesto.

For now, the government appears to be making progress on seven out of the 10 promises, while there seems to be no progress on the remaining three promises.

The three promises without any progress so far are those involving the Felda settlers’ debts, the Malaysia Agreement 1963 and introducing a new health scheme.

Promises in progress of being fulfilled include the abolition of GST, which the government has announced will be replaced completely by the Sales and Services Tax (SST) in September.

It also includes the setting up a royal commission of inquiry (RCI) on 1MDB as well as cancelling and reviewing mega-projects such as MRT3 and the East Coast Rail Link (ECRL).

The tracker will enable the people to hold the new government accountable to their words and actions, and keep an eye on whether Harapan is fulfilling its promises to the rakyat.