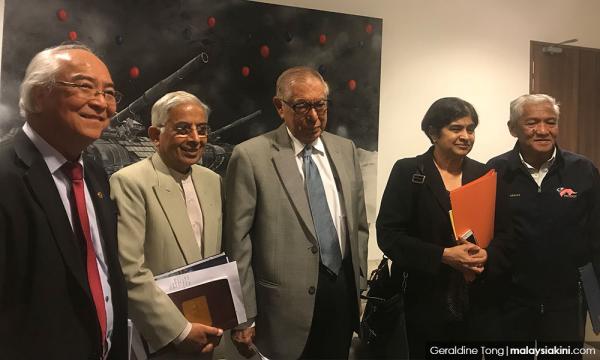 COMMENT | Most of the proposals for institutional reform have been made repeatedly over many years. Unfortunately, the proposals never gathered enough traction to be seriously considered and implemented.

Some prime ministers were more interested in aggregating power in their own hands, or slowly moving away from checks and balances. Strong independent minded officers did not last long, and in recent years, weak, compliant persons inhabited officialdom.

Lawyers for Liberty's Eric Paulsen made an interesting observation a few days ago, saying that many people do not appreciate the freedoms they enjoy and simply take them for granted. Over time, this results in us losing those freedoms, little by little.

Increased restrictions have been placed on freedom of expression, freedom of the press, freedom of worship, freedom of movement, right of peaceful assembly, equality and so on over the years. People became afraid when arrests and prosecutions began to take place, and more and more repressive legislation was enacted.

Even the courts are no longer perceived as bastions of justice. It was only when politicians like Dr Mahathir Mohamad, Anwar Ibrahim and Muhyiddin Yassin were at the wrong end of the abuse of power that the realisation took root – the importance of judicial independence, the separation of powers, the rule of law, a professional civil service and police force, an independent anti-corruption agency, and even an impartial speaker in Parliament.

The brief of the newly formed Institutional Reforms Committee seems quite wide. They have not as yet issued their terms of reference. Here are some of the institutional reforms that are most urgently required.

Judges hold the balance between the rights of citizens and the rights and power of the state, and mediate disputes between citizens. They play a vital role in ensuring that justice is done and that disputes are resolved in a fair and just way.

It is therefore essential that the right people are selected to become judges. Clear criteria must be established for candidates. Provision should be made for those lawyers who consider themselves qualified to become judges to apply to a body set up to vet applications and to make recommendations for appointment.

The power to appoint should not be vested with the prime minister, or even with the chief justice alone. The promotion of judges from the High Court to the Court of Appeal should be determined by such a body.

The present Judicial Appointments Commission (JAC) is the body appointed, but there are lingering issues about its composition and powers. Here, It is the prime minister who ultimately decides which candidates to accept as judges or those promoted to the Court of Appeal.

In the UK, members of the JAC are appointed by open competition. The chairperson of the commission is a layperson, as are the other five members of the 15-person tribunal. They make recommendations to the chief justice who has the power of veto, and the prime minister is not involved in the process altogether.

The point of this is to take the politics out of the process. Judges are not required to be friendly to the party in power; rather, they are required to be neutral of politics.

Prior to 1988, the judicial power of the federation was vested in the High Court. After 1988, Article 121(1) of the Federal Constitution was amended to say that the High Court “shall have such jurisdiction and powers as may be conferred by or under federal law.”

In other words, the High Court was only to have powers that the legislature chooses to give them. A recent Federal Court decision has suggested that such an amendment would have no effect, and the powers of the High Court would continue to devolve from the Constitution.

To make the position abundantly clear, that amendment should be rolled back, and the earlier clause restored. This is what the separation of powers means.

Judges will only be as independent as the system allows them to be. The independent legal mind is formed at law school and later in the practice of law. An independent Bar is the corollary to the independent judiciary.

A lawyer must be fearless in the pursuit of justice. And equally, a judge must decide without fear and favour. It follows that not all lawyers are suitable for judgeship, and only the best must be selected. A balance must be struck between appointing judges from the private sector and from the legal and judicial service.

Under our system the AG is a very powerful person, and if he/she is pliable or corrupt, much damage can be done. To ensure the AG’s independence, the constitution gives him/her the same protection as a judge. The AG can only be removed for misconduct and by the decision of a tribunal set up to hear charges made against him/her.

Consideration must be given as to how candidates for the position of AG are identified and as to who appoints the AG. If the AG is just the adviser to the government and the power to prosecute resides in a different body, the problem becomes less acute.

Allegations of abuse of power by members of the force are many. The number of deaths in detention is scandalous.

There was a time when the police officer was a reassuring presence. But in recent years, the perception has been that the police were used more in the repression of peaceful dissent than in preventing crime or apprehending criminals.

The killing of Atlantuya Shaariibuu by two police officers acting under orders remains unresolved. The question of who gave the orders for the killing of Atlantuya was never canvassed, and remains a mystery. Her family and the Mongolian government have repeatedly called for further investigation and for justice to be done.

The Scorpene submarine and 1MDB scandals have dominated our political and legal landscape for many years. They have rocked the nation. Senior officers were transferred out of the MACC because the investigation was getting close to the truth.

Suggestions have been made to make the MACC accountable only to Parliament, and to give them the power to initiate and conduct prosecutions.

Past election commissioners have been partisan. They have assisted the ruling party stay in power through gerrymandering, malapportionment and the improper use of postal votes.

The Election Commission is an independent body. But its chief commissioners have not lived up to their constitutional responsibilities. It will be a challenge providing a solution to this problem.

The sight of MPs shouting at each other – sometimes using ‘un-parliamentary’ language – has been disillusioning. Hopefully things will change now.

MPs must educate themselves on the rules of debate. They must do their homework – both in scrutinising bills that come before them, and in addressing issues affecting the nation at the level of their constituencies and nationwide.

The role of the opposition must be acknowledged. Opposition MPs must be given the resources required to enable them to do their work, and must be treated as a ‘government in waiting’.

There should be a shadow cabinet and we should also follow the UK model in the use of more select committees to scrutinise the work of government departments. Opposition members should serve on these committees.

Additionally, the speaker must be nonpartisan. In the UK, the speaker on his appointment resigns all political affiliations and swears allegiance to the responsibilities of the office.

The Senate must be more than a mere rubber stamp. It should be more than a place to reward aging party loyalists, but rather a place where bills and policies are vigorously debated. They should have the power to send bills back with suggestions for amendment.

Senators should be appointed to represent minorities and special interest groups – like environmentalists, disabled people, etc. Some should represent minority parties – even members of the opposition. They should be outstanding men and women whose views would be useful to the nation.

Given the importance of this office we should follow best practices. For a start, the leader of the opposition should sit as the chair of the Public Accounts Committee. And the proceedings of the PAC on important inquiries, like 1MDB, should be open to the public. In the UK, they are telecast live. This ensures transparency and prevents allegations of cover-ups.

This is a vast area, and there have been many studies done on the improvement of the civil service.

Arguably, there have been in recent years improvements in the quality and efficiency of the service. The size of the civil service is an issue. Too many civil servants result in underemployment and inefficiency.

Next is the demography of the civil service. The civil service should reflect the racial diversity of the population. In that way, all races are represented, and their needs and sensitivities will be better addressed. And it is important for nation building that all races participate in their own governance – not just at the political level, but also in the civil service and in the armed forces.

Finally, and probably the most crucial point. Promotion in the civil service should be made on merit. Only the best should head departments. Regard must be had for ability, integrity, character and for leadership.

Knowledge and proficiency in several languages should be encouraged with Malay and English being essential requirements. Knowledge of other vernacular or local languages should be regarded as useful. This will enable them to communicate more effectively with people, especially given that Malaysia has 137 living languages.

Only as good as the people in office

In the ultimate analysis, whatever structural reforms are made, a system is only as good as the people who are appointed to look after them or to discharge the responsibilities given to them.

Attention must be given to the suitability of candidates for the various positions. Strong men and women of ability and integrity must be appointed – those willing to risk their jobs and positions when resisting actions that are clearly wrong.

There must be independent bodies making critical appointments to prevent the appointment of pliable persons into jobs requiring independent minded persons.

There is always a reluctance for the party in power to cede some aspects of their power to non-elected bodies. But given the lessons we have learnt in the last few years, we must institute reform that will entrench our democracy and our freedoms for the longer term.

That is what Mahathir, Anwar, Lim Kit Siang and the rest of their team have promised to do.

DAVID DASS is a regular commentator on Malaysiakini. He is apolitical but observes politics closely.