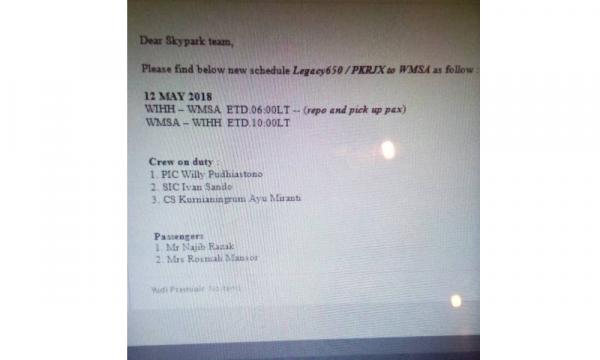 Najib Abdul Razak will be leaving for Jakarta for a two-day break beginning tomorrow, according to a source close to the ousted prime minister.

The source said this when asked about the veracity viral photograph detailing a chartered flight manifest which lists Najib and his wife Rosmah Mansor as passengers.

According to the photograph, the flight - with the tail sign PK-RJX - was to depart for from the Subang airport at 10am tomorrow.

This sparked speculation that Najib was about to flee, three days after leading BN to its worst electoral outing ever.

"He wants a rest and so he is going away for two days. He will be back," said the source.

The source dismissed speculation that Najib was about to flee the country.

"Everyone has the flight schedule... So they can go and check if he is fleeing with bags of money and stuff... There is no such thing (as fleeing)," said the source.