The government is studying measures to increase the number of Indian students in matriculation colleges and public institutions of higher learning (IPTA), Prime Minister Najib Abdul Razak in Putrajaya today.

He said this was because the intake of Indians in IPTA had not achieved the target of seven percent now.

“The government is looking into increasing the number of matriculation places for Indian students.

“As an inclusive government, we have always ensured no one should be left behind in the development of the country,” he said when speaking at an event of MyNadi Foundation which is a non-governmental organisation set up to raise the living standard of the Indian community in the country.

In this regard, the prime minister said 100,000 households of the Indian community with the median income of the bottom 40 percent (B40) would be able to participate in a special investment scheme in Amanah Saham 1Malaysia (A1SM) which would be launched on April 7.

“This is a very encouraging achievement. So believe me that I want each Malaysian including the Indian community to feel hopeful for all in the country,” he said to the thunderous applause of more than 700 participants in the event.

Najib said the government was always fostering the spirit of “nambikei” (trust) with the community to move forward as a race to ensure the wellbeing and prosperity of the people. 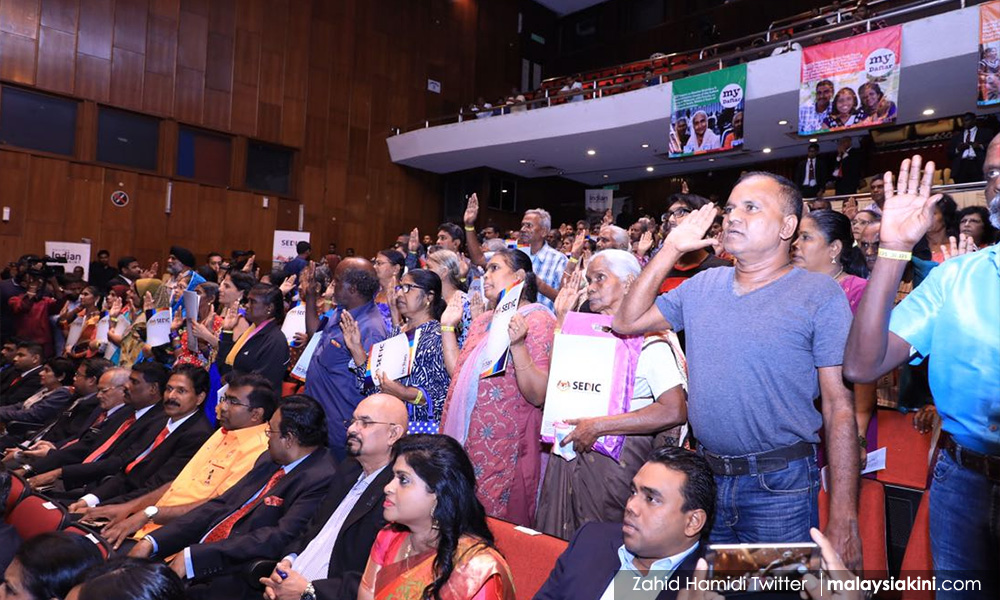 “Under the present leadership, we will continue to assist the Indian community to find the rightful place in the country. This is my hope,” he said.

Even though the government placed its emphasis on inclusive policies, Najib said there would be individuals and groups in the community who were marginalised over a number of reasons in whatever system in the world.

“As a government, we will look into the needs of all groups. For the Indian community, the government had launched the Malaysian Indian Blueprint (MIB) on April 23 last year with the progress made in several areas. But we will continue to implement more programmes.

“I believe we need to combat the challenges and problems of the Indian community through education with an emphasis on social mobility and ensure they have the correct values and principles in life and secondly to ensure the value of family and a close-knit community for success,” he said.

Najib said both aspects needed to be strengthened so that the Indian community could overcome the problems and challenges faced by them.

"The effort of providing the right kind of education, quality education, access to higher education and vocational training will ensure every individual will be able to realise his or her maximum potential is something that I like to see in the country.

"Secondly, we need the support of the local community and family, because if you are a fractious community who do not support one another, then it is difficult to uplift the fortune of the community. You need to rally and work together, and the social, as well as family values, is important,” he said.

On MyNadi Foundation, Najib said the NGO had carried out various welfare works which benefited the Indian community and received the appreciation of various parties.

"Our effort is to ensure that our development will touch the lives of every single individual and that development is all encompassing of inclusive. Besides the government and political parties, but a third force namely the NGOs, can also work together with the government in partnership,” he said.

“Due to the contribution of the government, MyNadi Foundation had launched several welfare projects successfully,” he said.

Najib said he was also attracted with the way the welfare work was practised by Jeyaindran which emphasised on the value of money in implementing projects, among them a crematorium and school science laboratory costing about RM40,000 each.