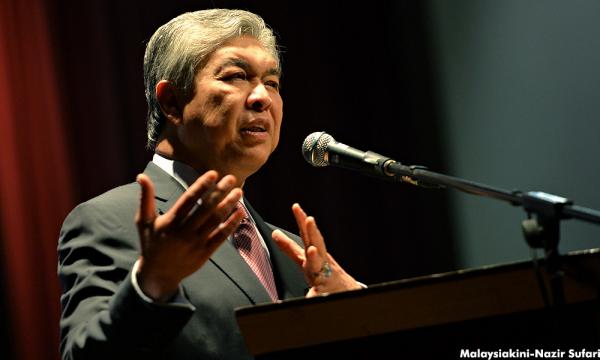 M'sia confident it'll be on Tier 1 in human trafficking fight

He said the Tier One target for 2020 could be achieved if Malaysia received the cooperation of source countries that posed problems to Malaysia.

“This is because the one that bears the burden of this issue is our country,” Ahmad Zahid, who is Home Minister, said at the Dewan Rakyat sitting here today.

He was replying to a question from Raime Unggi (Tenom-BN) relating to factors that contributed to the improvement in Malaysia’s position on the United States State Department report on the US TIP Report as well as Malaysia’s action in maintaining the momentum of this achievement.

The US TIP Report 2017 involves assessing 187 countries on efforts to fight against human trafficking crimes.

Ahmad Zahid said, among factors, Malaysia was now at Tier two was the implementation of investigations and conviction of human trafficking cases and participation at high-level committee meetings.

The government also forged cooperation with non-governmental organisations to improve aspects of protection to victims of trafficking besides updating existing regulations, he said.

“This is followed by several follow-up actions, especially when we forged cooperation with source countries that thrust the problem to us. It is unfair that a country is placed on Tier One but that country is the source country to us,” he said.

Ahmad Zahid also congratulated the Anti-Trafficking in Persons and Anti-Smuggling of Migrants Council (Mapo), Royal Malaysia Police and various parties for assisting in achieving that success.

Replying to Raime on the number of NGOs involved in assisting the victims of human trafficking, Ahmad Zahid said so far two NGOs were working together as well as receiving government allocations.

“We encourage other NGOs to cooperate with these existing NGOs to provide shelter and job opportunities to human trafficking victims. Several companies from the United States are even offering jobs to the victims,” he said.