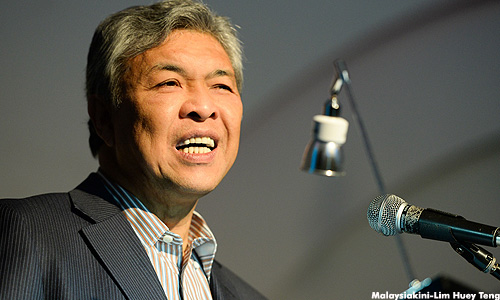 'Higher ranking proves our seriousness in dealing with human trafficking'

“Malaysia was placed at Level 3 in the ranking for the last five years, but after taking some drastic measures, it is now at Level 2,” he said.

"This is part of our efforts to uplift Malaysia’s image in the eyes of the world and such a recognition should be attained,” he told reporters at an Aidilfitri open house held at his official residence, Sri Satri, in Putrajaya today.

He noted that during the then United States president Barack Obama’s visit to Malaysia in April 2014, the latter had set seven conditions to give Malaysia the opportunity to be included in the US Visa Waiver Programme.

Zahid said the conditions were met by the Malaysian government including reducing the visa application rejection rate to less than three percent, perusing of list of suspects given by Interpol and sharing of information on terrorism, while Malaysia’s position improved in terms of tackling smuggling of migrants and security maintenance.

He said the rise in ranking was the result of cooperation between seven ministries, 10 relevant government departments, and agencies, as well as 13 NGOs in combating the scourge of modern slavery, through eight meetings chaired by him.

On another note, he said he was still waiting for the report from Wisma Putra on the latest developments with regard to the persecution of ethnic Rohingya in Myanmar before initiating humanitarian efforts to help the minority group.

Zahid who is also home minister said he would be discussing the Rohingya issue with Prime Minister Najib Abdul Razak for further action.

"We will undertake humanitarian efforts and diplomatic action based on advice given by Wisma Putra,"  he said when asked to comment on media reports that Myanmar was preventing the entry of United Nations investigators to probe into claims of killing, rape and torture of Muslim Rohingya by Myanmar’s security forces.