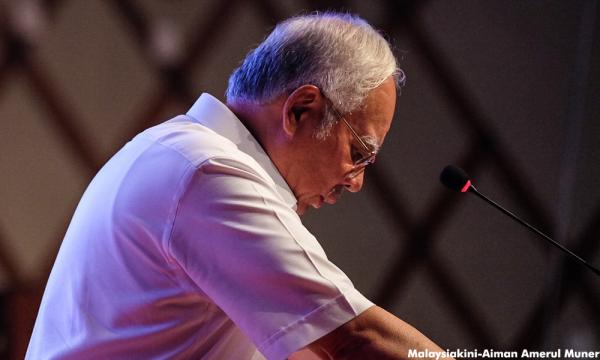 MP SPEAKS | As the first half of 2017 draws to a close, Prime Minister Najib Abdul Razak is probably regretting the strategic overreach he has committed. At the moment, he and his wife Rosmah Mansor are reportedly holidaying with a large entourage in Bali and Perth, which is probably a half-yearly retreat to re-assess the political scene with his advisers.

This year began with Najib believing he was invincible and “unsinkable” (as The Diplomat magazine describes him), that the opposition is in shambles, and that arch-rivals Dr Mahathir Mohamad and Anwar Ibrahim would not be able to reconcile to form a formidable team against him. It looked like they would not pose an electoral threat to BN.

He also believed that the de facto "coalition" with Abdul Hadi Awang’s PAS was sufficient to deliver victories to Umno and BN through planted three-corner fights.

Najib was confident that the economy would be in a better shape through the general expansion of exports as well as deals with China.

Everything was perfect for him. The plan was to dissolve Parliament in September or October.

It has long been rumoured that Perak MB Zambry Abdul Kadir, who assumed office after the Perak coup in 2009, will be moved to federal.

Negeri Sembilan MB Mohamad Hasan, in office since 2004, is a great survivor as he was rumoured to have been shown the door even as early as 2008. Pahang MB Adnan Yaakob, in office since 1999, told friends that he was not sure if he would be fielded again.

Kedah MB Ahmad Bashah Md Hanipah is not an inspired leader, while Terengganu politics under MB Ahmad Razif Abdul Rahman is in a mess, and Perlis MB Azlan Man is not Najib’s choice.

Those considerations are not new.

Musa Aman and his brother Anifah Aman resisted Najib’s move by attempting to force a Sabah state election. The tussle came to a head in February when Anifah was rumoured to have resigned as Foreign Minister and The Star published an exclusive report of the possibility of the separate poll.

Khaled Nordin’s selection as Johor MB in the 2013 general election was due more to the Sultan’s choice rather than being Najib’s ally. In the initial period after Muhyiddin Yassin was sacked from the cabinet at the height of Najib’s 1MDB “Donation-gate” in July 2015, Khaled was seen trying to distance himself from the prime minister. I was told that Khaled asked aides to look into the possibility of a separate state poll.

My friends in Umno are of the view that recent MACC activities in Johor and Malacca are related to the attempt to move Khaled and Idris to federal and replace them with a new set of leaders who would be more loyal to Najib.

The peak of Najib’s strategic overreach was the appointment of his cousin and Defense Minister Hishammuddin Hussein as Special Functions Minister in the Prime Minister’s Department in April. From Najib’s camp, the appointment was meant to clip Zahid’s wings and to prepare Hishammuddin for post-GE Umno party election.

The fundamental flaw with the strategy is that Najib is the problem, not the solution. Najib’s popularity among the voters is at a historic low and unlikely to recover.

Time is not on Najib’s side. His momentum was stopped from May onwards. The mishandling of the Bandar Malaysia deal, the Felda Global Ventures Holdings Berhad (FGV) fiasco and the United States’ Department of Justice (DOJ) suit on 1MDB further weakened his position.

For Bandar Malaysia, Najib thought he could replace Chinese investor China Railway Engineering Corporation (CREC) with another Chinese investor, Dalian Wanda Group Co Ltd, to fetch a much higher price without understanding the nuances of the Chinese political economy.

Wanda is a private enterprise which has to seek government approval for its foreign investment, while Malaysia’s snub of state-owned CREC is a slap in the face of the Chinese government.

China’s government is now taking a wait-and-see approach towards Najib’s government as a trust deficit creeps in, and Najib is seen as weaker than previously thought. Major deals are unlikely to take effect until after the next general election.

The FGV fiasco threatens not just elite cohesion, but may seriously dent Umno’s survival in the next general election. A 15 percent swing of Malay support across the board could result in Umno-BN losing up to 40 seats in the Peninsula alone, thus losing power.

The opposition is not strong yet, but grudgingly, the forces aligned to Mahathir and Anwar are trying to find a way to co-exist and reconcile. Once full realignment takes place, Pakatan Harapan has the possibility of being seen as the better-governing coalition.

Umno’s alliance with PAS is resisted by BN parties in Sabah and Sarawak, and even some Umno and PAS grassroots leaders are unhappy with the collaboration. Kelantan Umno leaders still think they can defeat the PAS state government, hence there shall be no deal with PAS at the state level.

The third and current DOJ civil suit brings national attention back to Najib and Rosmah. The US$27 million pink diamond necklace easily puts “the wife of MO1” ahead of Imelda Marcos’s excesses.

The revelations by The New York Times in March 2015 of 1MDB’s corrupt deals, The Wall Street Journal in July 2015 of the US$681 million “donation” into Najib’s personal account, and DOJ’s first civil suit in July 2016 have eroded Najib’s authority each time.

Time is running out for Najib

Najib was previously saved by the support of Umno warlords, particularly the division heads, and his grip over various institutions such as the Attorney-General’s Chambers.

But Najib’s strategic overreach in the first half of 2017 backfired and alienated Umno bigwigs who propped him up in the previous occasions. His reputation as “unsinkable” may now see the sword of Damocles over his head.

Najib may just be one or two mess-ups away from an internal revolt.