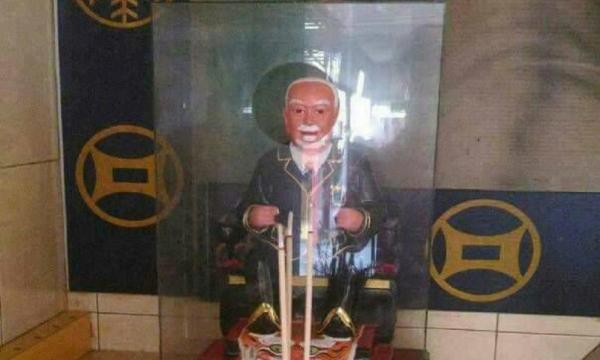 A Taoist shrine honouring the late Karpal Singh has surprised his family, but they are exercising restraint so as not to offend other religions.

Karpal's son, Ramkarpal Singh, said the family was not consulted when the shrine was set up on May 1 in Perak.

"We were not informed about it by the temple before it was set up. This was completely unexpected.

"We don't wish to offend any religion or tradition and prefer not to offer any comments on the matter," he told Malaysiakini when contacted.

The shrine was set up by the Tian Feng Gong temple in Teluk Intan.

The temple's caretaker Goh Chai Huat was quoted by Sin Chew Daily as saying that the shrine was completed after it managed to raise RM2,000, including contributions from a Sabahan devotee.

Karpal, who was Bukit Gelugor MP and DAP national chairperson, died in a car accident in Kampar on April 17, 2014.

He was succeeded by Ramkarpal as Bukit Gelugor MP.

This is not the first time a Taoist shrine had come under the spotlight.

In February, a Taoist shrine in honour of a Malay 'datuk kong' in Klang that bore Quranic verses raised the ire of the state Islamic religious department.

The shrine was subsequently demolished by the authorities, but on the grounds that it was illegally built on government land.