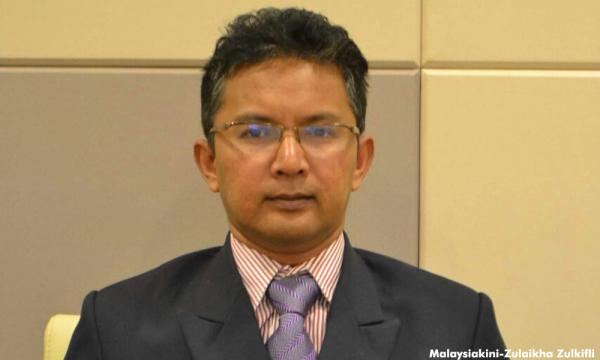 Universiti Utara Malaysia (UUM) lecturer Kamarul Zaman Yusoff has touted his academic credentials in the face of derision after he accused Subang Jaya Hannah Yeoh of proselytising by making Christian references in her book.

“The Bachelor of Arts with double major that I obtained from Indiana University at Bloomington (IUB) was with highest distinction, which is reserved only for graduates with a cumulative grade point average of between 3.90 to 4.00.

“Apart from that, I was also a recipients of the Senior Achievement Award, an award reserved for students who have outstanding academic records and who are designated by their departments or schools as having unusual potential in their field),” he said in a statement.

Listing out the list of unflattering comments against him, Kamarul said his record proved that they were wrong.

“Therefore, it is very wrong to describe me as stupid, without quality and credibility, unqualified, without calibre, half-baked, narrrow-minded or extremist,” he said. Kamarul said he had no problems mixing with non-Muslims while he was studying in the US.

“I also do not have any problems working and mixing with non-Muslims in Malaysia. I am very comfortable and well-received by my colleagues and students at UUM,” he said.

Kamarul stressed that his views are based on facts and law and are not stupid nor extreme. He added that his opinion and police report against Yeoh over her book, ‘Becoming Hannah: A Personal Journey by Hannah Yeoh’, also had nothing to do with UUM.

“Both (my opinion and police report) are unrelated to the education institution at which I currently serve, which is UUM. It is inappropriate for everyone to associate the actions I did in my personal capacity with UUM or any other educational institutions,” he said.

Kamarul said he only served at UUM beginning Jan 26, 2016 and does not hold any senior position apart from being the Director of Institute for Malaysia Political Analysis (Mapan).

“The ones who are stupid and extreme are those who do not argue based on facts and law, which include those who belittle anything that has to do with Malays or Islam, merely to get votes,” he said.

Meanwhile, a group of NGOs also defended Kamarul, claiming that there was an attempt to silence his academic freedom.

Centre for Human Rights Research and Advocacy (Centhra), Concerned Lawyers for Justice (CLJ), Muslim Lawyers Association Malaysia (PPMM), iPeguam and Young Professionals (YP), in a joint statement, pointed out that Yeoh was the one who had first lodged a police report against Kamarul over his comments about her on Facebook.

“Her report clearly amounts to the deprivation of the right of an academician to his academic freedom of speech and expression, a fundamental right that is guaranteed by Article 10(1)(a) of our Federal Constitution and Article 19 of the Universal Declaration of Human Rights (UDHR).

“Further, the report aims at intimidating and suppressing academicians in Malaysia from expressing their valid and substantiated academic and professional opinion on any political party or politician.

“We also abhor and denounce the various comments made on social media directed at the Kamarul for his opinion and condemn the attempt at diverting the issue to one of his own faith in his own religion when clearly that has never been the crux of the issue at hand, which is Yeoh’s own refusal to countenance Kamarul’s opinion of her autobiography,” they said.