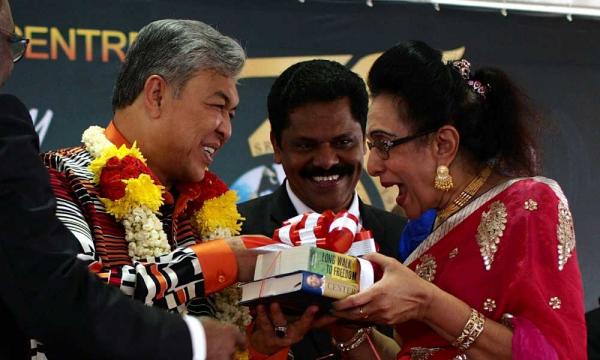 YOURSAY | ‘Don't help because they are poor, but give them the 'tools' to help themselves.’

The latest Malaysian Indian Blueprint (MIB) is like a bell ringing from afar. Sounded so familiar. So soothing that it makes you want to hum along "Nambikai, you help me, I help you."

But before that, ask PM Najib Abdul Razak about the fate of Hindraf and its followers.

ABC123: I agree that a poor Indian should be helped. But only because he is poor. Not because he is Indian. Enough with this type of racial thinking.

FutureMalaysians: ABC123, don't help because they are poor, but give them the necessary 'tools' to help themselves.

By tools, I mean give them the necessary education, technical or otherwise, the hands-on training, some capital, opportunities in jobs, training, etc, or some piece of land to work on.

They need not be given food or handouts that will not last long and their ability to survive will be limited. I think the government is in a position to do that.

MA: Sadly, this is the tale of Indians in Malaysia being retold many a time. We look forward to the day when Indians can lift their heads high in proud admiration of their achievements.

Until today, Indians have been trained to look for the fodder thrown in between the MIBs and the MICs. Sad indeed.

Anonymous #37634848: Writer P Gunasegaram, you have pointed out that the Indian average income is better than the Malays and bumiputera. How did that happen if not for the capable Indians seizing the opportunities made available in the country?

Way back in the 60s and 70s, there were hardly any Indian businessmen. Look around the country now, they do have a prolific presence in all types of businesses.

The majority of them, coming from the estate sector, were resigned to their lackadaisical life experienced in the estates that they grew up in and worked.

Coming out into the concrete estates, some of them have made it, but most were not prepared for the shocks in store. The MIC was meant to look after all Indians but it has not been effective, although there are provisions under the New Economic Policy (NEP).

Bumiputhran: There is one misleading perception in the assertion that the per capita income for the Indians is higher than the Malays. This higher income does not translate to better outcome of life chances for the Indians due to the racial discrimination that blocks opportunities.

There is a glass ceiling and extra expenditure by the Indian family to achieve basic life opportunities, mainly through private education for children, less handouts from government largesse, which the Malays are given.

Hence, the higher per capita income does not produce the desired consequential outcome.

Legit: A major part of the problem for the Indian Malaysians' predicament lies with MIC. The party, especially during the S Samy Vellu era, allegedly squandered any little assistance or pittance given to the Indian community by the government, be it scholarships, shares, job opportunities, etc.

Now the latest scam is by rogues fleecing the Indians through money games such as forex (foreign exchange) investments.

The whole problem with the community is that there are no effective and honest leaders to steer them in the right direction. Educated and capable Indians do not want to get involved because the alleged thugs in MIC and other Indian organisations harass them.

It looks like the only way out is for the government to take the community under its wing and provide the help directly by doing away with MIC and other such Indian organisations.

Anonymous #13114320: If MIC has been standing for the rights of many Indians since earlier, there wouldn’t be problems now.

Here's the problem that none of the Indians wanted to acknowledge, not even the Indian ministers.

The majority are selfishly greedy. When the opportunity arises, they will show their alleged greed for power and wealth, to the extent of exploiting their own kind. So one shall rise and many shall fall.

That’s why a few MIC leaders had seemingly enriched themselves over the years, and giving perhaps less than crumbs to their people. Yet those at receiving end were pretty pleased. It’s better than nothing.

Appum: Gunasegaram, I have read many of your writings and have given them top marks. Unfortunately, this one is too simplistic and superficially treated.

What is said is already obvious like the Indians are the most marginalised, most neglected in social and economic mobility.

Most aggressive gangsters and deadly criminals are allegedly Indians. In order to solve this problem we must make structural changes like better educational opportunities, quality schools and teachers.

More efforts and money should be allocated for such schemes. More opportunities must be allocated to Indians in the civil service, which is the biggest employer.

But don’t come out with another NEP for Indians, like a NIP (National Indian Policy). Further, blueprints have recognised only the Indian dilemma but there has been no concerted effort to implement them. Or if tried, they will be impeded by some little Napoleons.

There is no use depending on Umno-MIC; they have failed after so many years. Indians must not be easily bought but vote in a government that sees to the needy, not race.

Robbed!!: Sorry, Guna, after all the ‘blur’ prints that we have come to know since Samy Vellu's time, the MIB will never happen. Not only MIB by all other ‘blur’ prints undertaken by the government.

They are all just nice slogans and opportunity to allegedly siphon money and enrich pockets.

Gggg: It is a tough life for us. Things might have been different if the early labourers got justice expeditiously but unfortunately their files went missing.