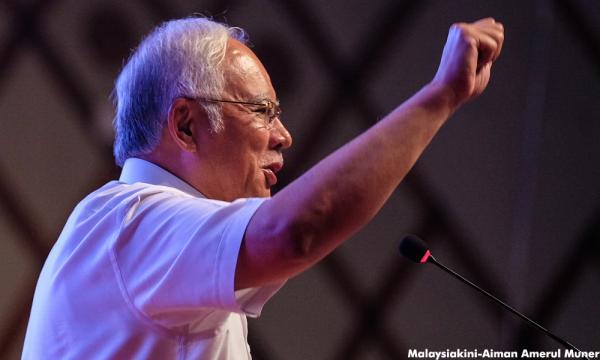 Malaysia's 1.6 million public servants have long been one of the most reliable vote banks for Prime Minister Najib Abdul Razak's ruling coalition, but as he prepares to seek re-election he faces warnings that soaring living costs risk eroding that support.

Prices have risen sharply since Malaysia cut state subsidies and launched a national Goods and Services Tax (GST) to plug a hole in its finances caused by falling oil and gas revenues, and rank-and-file government workers say they are feeling the pinch.

"My wife earns some side income doing freelance work, but we just can't save," said 28-year-old Mohd Nizam, who has supported Najib's United Malays National Organisation (Umno) in the past but, like around a dozen public sector workers who spoke to Reuters, did not want to say if he would do so again.

"I don't know how we'll manage if we have a child," said Nizam, who rides a motorcycle to work each day in the administrative capital Putrajaya, where he earns RM3,000 a month as a government clerk.

Rising prices were a key factor that prompted urban and non-Malay voters to abandon the coalition led by Umno over the past two elections.

But Umno clung on to its rural Malay Muslim heartlands and the votes of rank-and-file civil servants - most of whom are ethnic Malays due to a decades-old positive discrimination policy that gives them priority for government jobs.

The next election is not due until 2018 but, after facing down a corruption scandal at state developer 1Malaysia Development Berhad (1MDB), Najib is expected to capitalise on opposition disarray and call an election this year.

Analysts expect Najib to win, but he has little room for manoeuvre. In 2013 the Umno-led Barisan Nasional coalition lost the popular vote but won most seats in parliament - if its majority were further eroded this time Najib could face an internal leadership challenge.

Rizalman Mokhtar, a grassroots leader with Umno, said he feared civil servants - who make up around 15 percent of all voters - could turn against the party if nothing is done about the rising cost of living.

"We have to address this issue, or it will have a big impact on our support," he said.

Malaysia's annual inflation hit an eight-year high of 5.1 percent in March, among the quickest in South-East Asia and far outpacing Singapore, Indonesia, the Philippines and Thailand.

Private sector wage growth is expected to average 5.7 percent between 2013 and 2017, based on data compiled by the Malaysian Employers' Federation.

But public sector wage growth was between 2 and 3 percent over the same period, according to the Congress of Unions of Employees in the Public and Civil Service (Ceupacs).

Ceupacs president Azih Muda said civil servants have ended up heavily indebted to manage rising living costs, to the point that more than 60,000 of them risk bankruptcy.

"This is a direct effect of the hike in cost of living. Civil servants end up taking up a lot of loans and this is unsustainable and they are unable to manage their finances," Azih told Reuters.

"The hardest hit would be the rank-and-file civil servants working and living in major cities like Kuala Lumpur or Penang," Adib said, adding that civil servants had less flexibility to take part-time jobs than other low-paid urban workers.

Najib last month assured the public that managing cost of living remained his government's priority, arguing that Malaysia remained among the cheapest countries in the region.

"We have done a lot of work to ease the people's burden related to the rising cost of living," the 63-year-old son of a former prime minister said in a statement.

But the dismantling of fuel subsidies, needed to stave off the threat of a sovereign rating downgrade after Najib's narrow 2013 win, came at the expense of public goodwill.

"High cost of living, their children cannot get scholarships, unemployment is very high. Many people feel how poor they are now," the 92-year-old political veteran said in an interview with Reuters.

Anwar remains in prison serving a sentence for sodomy he says was politically motivated, however, and in his absence a feud has fractured the opposition alliance.

With his opponents more divided than at the last poll, government sources have said that Najib is considering a calling snap election by the third quarter.

Ibrahim Suffian, director of independent opinion polling firm Merdeka Center, said that is not without risk - if the opposition can get their act together.

"If the opposition are able to agree to a pact and minimise multi-cornered contests, we're looking at several states changing hands and a significant drop in BN's parliamentary seats," he said.