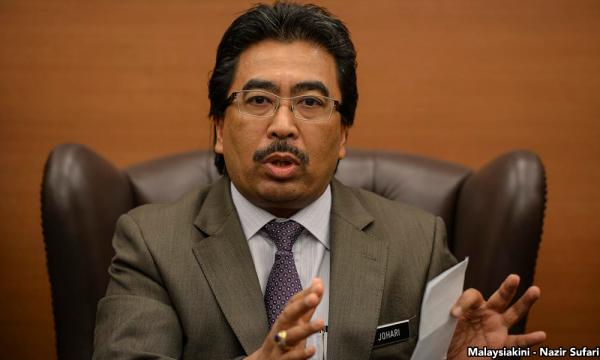 COMMENT I refer to a press statement issued today by YB Tony Pua.

YB Tony Pua is well-versed in the facts concerning 1MDB, given he is a member of the Public Accounts Committee (PAC). Thus, it is disappointing to note that he has chosen to misrepresent the facts and has accused me of lying, in his desperate attempts to mislead the rakyat.

The matter at hand is clear, simple and has been publicly explained, as evidenced in page 81 of the PAC Report on 1MDB.

The facts are as follows:

1. The TRX and Bandar Malaysia lands were originally owned directly by the government. The government made a decision to sell the lands in 2010 and 2013 respectively, to 1Malaysia Development Berhad (1MDB), a holding company 100 percent owned by MOF Inc. 1MDB in turn owned the lands via its 100 percent equity shareholding in two subsidiary companies, ie TRX City Sdn Bhd (TRXC) and Bandar Malaysia Sdn Bhd (BMSB).

2. It is clear that from the above transactions, the government ownership of the lands shifted from direct to indirect ownership, via MOF Inc ultimate ownership of 1MDB and its subsidiary companies.

4. Although the TRX land was sold at a nominal sum to TRXC, there was a responsibility to construct infrastructure not only in TRX but also in the surrounding areas, including a vehicular tunnel under Jalan Tun Razak, for a total sum of approximately RM 3 billion.

5. TRXC and BMSB undertook debts of RM800 million and RM2.4 billion respectively, to undertake the construction of infrastructure and the six air force/two police bases referred to above. These debts were always attached to the said land when these two companies raised their financing and thus form part of the security for the said debts. In other words, it is an operating debt of these two companies.

6. With the infrastructure development and planning approvals obtained by TRXC and BMSB from 2010/2013 to the present day, the value of the TRX and Bandar Malaysia lands have increased in value significantly.

6. The PAC recommended in April 2016 that MOF Inc take over direct ownership of Bandar Malaysia and TRX lands from 1MDB. The most efficient and cost-effective way to achieve this is via a transfer of TRXC and BMSB shares to MOF Inc. So, instead of owning those companies via 1MDB, MOF Inc will directly own BMSB and TRXC, along with all the assets and the operating debts of the respective companies.

7. The TRXC and BMSB debts will be repaid by future cashflows of these companies as described in page 81 of the PAC Report. Further, whilst TRXC will continue to be 100 percent owned by MOF Inc, it is pertinent to note that a sale and purchase agreement has been executed with a consortium for the sale of 60 percent equity shareholding in BMSB.

8. More importantly, page 81 of the PAC Report also makes clear that the debts that will remain on the balance sheet of 1MDB are the RM5 billion sukuk, the US$3 billion bond and the 2x US$1.75 billion bonds. These 1MDB debts will be serviced from matching cashflows, as described in the PAC Report. Whilst MOF Inc will not be taking over these 1MDB debts, the substance of the letter of support and guarantee from the government, remains intact, as described in the PAC Report.

There is therefore a clear distinction between 1MDB debts, which will not be taken over by MOF Inc, and the BMSB/TRXC project company operating debt, which are part of the assets and liabilities of the company and which will be serviced from the project cash-flows.