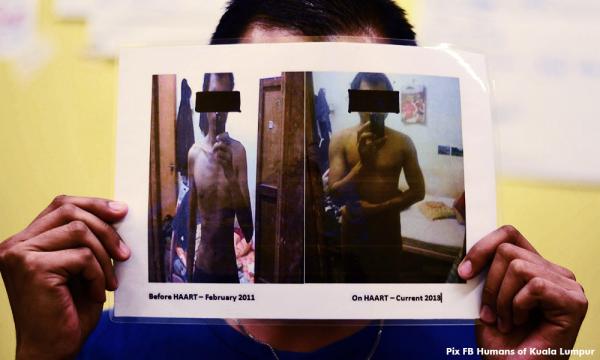 About seven percent of men who have sex with men (MSM) are HIV-positive, and the trend is likely to rise, the Malaysian Aids Council (MAC) says.

However, it is difficult for these men to come forward and seek assistance because they are often stigmatised - for being HIV-positive and then for having contracted it through sexual relations with another man.

"Due to a strict and prohibitive socio-cultural and legal environment, male-to-male sexual practices are often misunderstood and highly-stigmatised, thus creating barriers for MSM to access HIV prevention, treatment, care and support services," it says.

The MAC says the term men who have sex with men is an inclusive term, because not all men who do so are homosexual.

This is the story of one man who found himself getting weaker and weaker, thinner and thinner until one day he had no choice but to head to the hospital:

''I found out I was HIV positive when I started to feel like something was not going well.

''I started coughing first, my body started getting weaker and thinner, and I had used up all my medical leave already.

''They then referred me to Sungai Buluh Hospital (HSB) Infectious Diseases Unit where I got my counseling about HIV from the staff nurse counselor there and also about my HIV medication (HAART).

''The thing about us is that, we are afraid.

''Whenever it comes to testing us for HIV - we freak out. And there is the fear of being stigmatised. Because eventually, we will have to admit that we might have had sexual relations with other men.

''A (gay) friend of mine contracted HIV from another partner without knowing it.

''He thought of doing a police report, but the police informed him that they cannot arrest the HIV-positive partner if they don't arrest him as well, because being a homosexual in Malaysia is a crime, too.

''The police asked: 'Are you sure you want to reveal your sexuality to us police, because we think you’re gay.'

''In the end, they just told him to not do anything, as there was nothing he could do.''

This story was first published on the HUMANS OF KUALA LUMPUR Facebook page. In this photography project, Mushamir Mustafa takes pictures of random people in Kuala Lumpur, who share with him a story from their lives. It features on Malaysiakini every weekend.