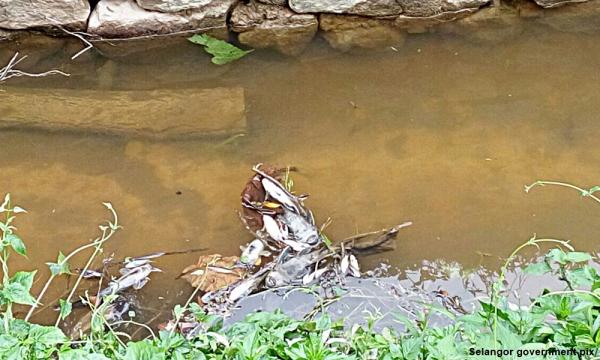 He claims the government had "strong evidence" of this, the New Straits Times reported him as telling reporters in Banting.

"From initial reports and evidences collected, there were tendencies that this incident was an act of sabotage by BN and Umno to undermine Selangor government," he reportedly said.

The plant had to be closed, resulting in water cuts, due to odour pollution of the water source, after dead fish were found floating in the river.

The Selangor government said the contamination is traced to Sungai Buah in Negri Sembilan, and relevant authorities there have been informed.

"From our investigation, it was seen that the way of contamination was pretty standard and very systematic.

"We have strong evidences in the case of Sungai Semenyih, and the Department of Environment and the Attorney-General's Chambers are completing their investigation.

"At state level, we have taken stern action by seizing the land owned by the company that had caused the pollution, as well as all its equipment," Azmin reportedly said.

The Semenyih water treatment plant was closed thrice last month following similar odour pollution, resulting in the closure of a firm which was allegedly operating illegally near a river.

Dead fish were also sighted in Sungai Buah upstream waterways in Nilai, which leads to the Semenyih intake point, she said in a statement.

As at 4pm today, the two teams from Air Selangor and the Selangor Water Management Board (Luas), and representatives from the National Water Commission (Span) have yet to pinpoint the contributing source.

The Department of Environment in Negri Sembilan and Selangor have been informed, she said.

Relief water is being delivered to affected areas and critical premises like hospitals and dialysis centres, she said.

The affected areas are: