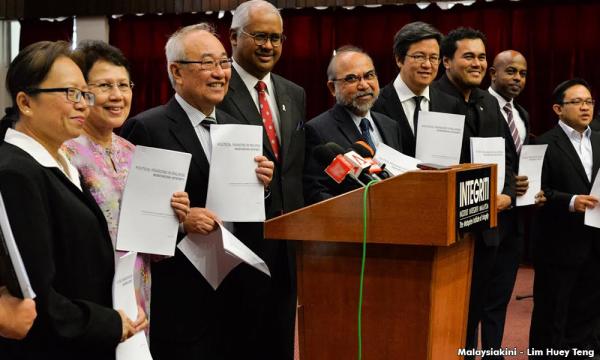 The report was unveiled by the committee’s chairperson, Minister in the Prime Minister’s Department Paul Low at a press conference in Kuala Lumpur today.

The report said “foreign sources” include individuals, companies, foundations, organisations, associations or any registered or non-registered entities that are not domiciled in Malaysia.

However, they are only prohibited from making donations in the form of cash.

On the other hand, companies receiving government concessions and contracts should be banned from making direct, indirect or in-kind political contributions, the report stated, adding that this applies to all layers of government.

“To facilitate compliance, government contracts at all layers of government must be published in an easily accessible and searchable way.

“If it can be proven that a company receiving government contract is financially supporting a party or a politician, punishment should be meted out to both the company and the party or politician receiving the support,” reads the report.

The committee also suggested that state-owned enterprises of all types – whether federal, state or local – and subsidiaries be banned from making political donations too.

“Should this occur, punishment should be meted out to both the state owned enterprise and the party or politician receiving the support.”

Meanwhile, money from unknown sources must be confiscated, the committee recommended.

“A mechanism must be created by the controller so that if a political party or politician cannot identify the origin of money they received, then this money should be confiscated and put into a fund that is managed by the controller for activities to strengthen democracy in Malaysia.”

The committee admitted that some donations, such as those made online, may be difficult to track but added that it cannot be used as an excuse for non-disclosure.

“The confiscated money must not be used by the party or the politician but must be transferred to this fund instead.”

The rules on disclosure, however, should be enforced gradually, with full implementation aimed for the 15th general election, it said.

“This is an acknowledgment to the fact that some donors may fear retribution and this may negatively impact the legitimate incomes of political parties and politicians if disclosure is enforced without proper preparation.

“Full disclosure of donor identity to the public should only be made compulsory before GE15. For GE14, it would be sufficient for donor identity to be disclosed to the controller,” said the committee in its report.