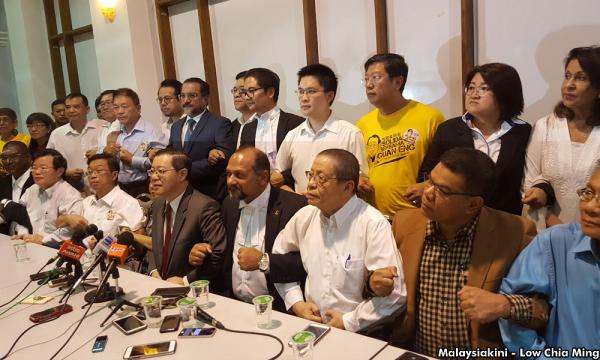 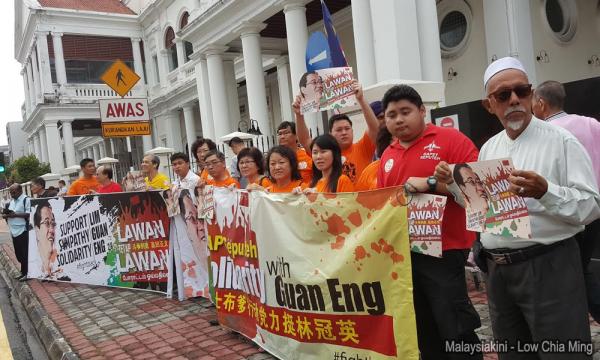 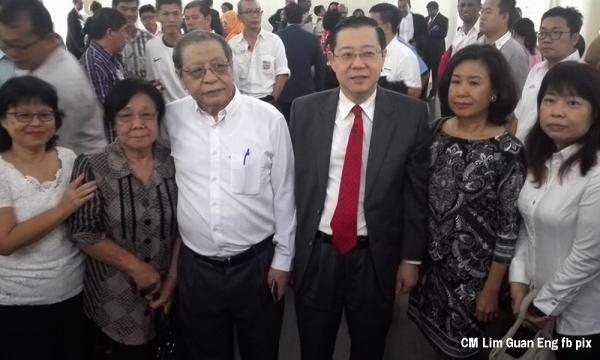 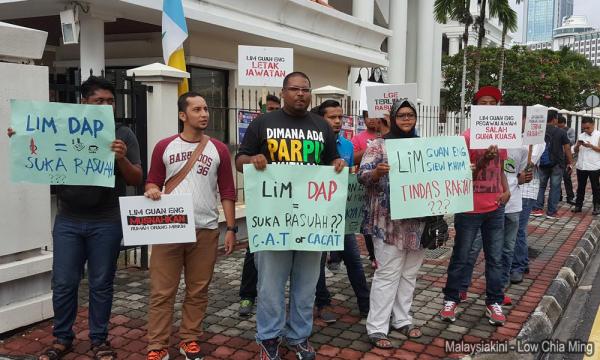 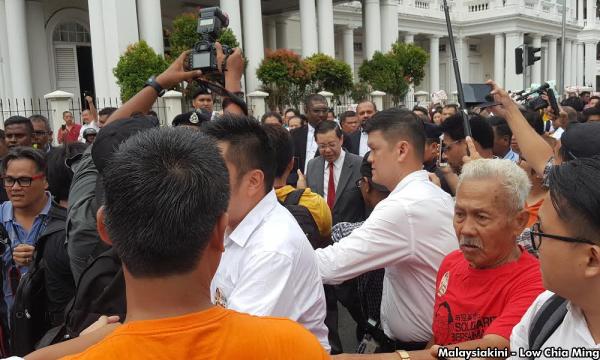 He is being charged in relation to a land rezoning and the purchase of his bungalow.

Malaysiakini brings you the live report of the events as they take place.

11.15am: At the press conference at Penang Town Hall, Guan Eng says, "I will leave it to my lawyers to prove my innocence".

He then goes on to criticise Umno and BN for their poor "magic" tricks, insisting his corruption charges had been conjured up.

"By playing magic, they can turn black to white and white to black.

The chief minister says the people no longer trust this brand of politics.

"It's very unprofessional. If people want magic, they would prefer professional magicians," he quips.

He adds DAP and the Penang government will continue to focus on abolishing the burdensome six percent Goods and Services Tax (GST).

At the press conference, Gobind confirms that Guan Eng's lawyers have yet to receive any documents related to a separate contempt case, which is expected to be filed soon by attorney-general (AG) Mohamed Apandi Ali.

10.45am: Court adjourns and DAP supporters march to the Penang Town Hall where a press conference is scheduled.

"We have been served a CD containing various documents, about 13,000 pages.

"The problem is there is no indexing and some pages are not clear, " Gobind says.

"This office must index all items to ensure all parties in this case are on the same page when it comes to trial, " he adds.

Hadhariah says she wants to see trial commence smoothly and in a fast and speedy manner.

She fixes Dec 6 for the second mention at the Penang High Court, 9am.

She tells both parties to ensure that the 30 volumes of documents are properly indexed.

"I am willing to give two months to do this.

"Make sure every bundle and its contents are properly paginated. Let there be no missing pages, " she adds.

Both Lim and Phang need not be in court on Dec 6.

9.30am: Lim's legal counsel Ramkarpal Singh arrives. He says the judge Hadhariah Syed Ismail will fix the dates for trial.

"Trial will most probably start this year, " he said.

Ramkarpal said the defence team received a 12,000-page document from the prosecution yesterday.

Lim, accompanied by his wife Chew, enters the courtroom and shakes hands with Phang. The courtroom starts to flood with special branch officers, reporters and Pakatan Harapan leaders.

He tells reporters, "I see you, that's why I am happy."

9.15am: Lim arrives at the court to supporters' shouts of "support Lim" while the detractors respond with "rasuah" (corruption).

9am: After a brief respite, the shouting match resumes with DAP supporters carrying large banners in solidarity and support of Lim. The two opposing groups are booing each other with police trying to keep the peace.

8.50am: A group of Indians carrying placards have joined the earlier anti-DAP group to protest the state government over land issues in Batu Kawan.

A noisy shouting match between DAP and anti-DAP supporters ensues while police try to calm the opposing groups. Northeast district OCPD Meor Faridaltrash Wahid is among the crowd.

8.30am: Reporters are not allowed into court until. 9.30am. Approximately 100 supporters have gathered outside along Light Street.

Lim, who is also DAP secretary general, has not arrived yet.

Lim pleaded not guilty to a charge of using his position as a public servant to obtain gratification for himself and his wife Betty Chew, by approving an application by Magnificent Emblem to convert two lots of agricultural land for residential development during a state planning committee meeting on July 18, 2014.

The offence under Section 23 of the Malaysian Anti-Corruption Commission Act 2009 (Act 694), punishable under Section 24 of the same Act, carries a jail term of not more than 20 years and a fine of not less than five times the value of gratification or RM10,000, which­ever is higher.

Lim also denies another charge under Section 165 of the Penal Code of using his position to obtain gratification by purchasing his house from businesswoman Phang Li Koon at RM2.8million, which was below the property’s market value of RM4.27 million on July 28, 2015.

The offence is punishable with a maximum two years’ jail, a fine, or both, upon conviction.

Phang, sporting a white coat, arrives at about 8. 20am accompanied by her family members.

She faces an abetment charge for allegedly selling the bungalow in Pinhorn Road to Lim.

Lim said although the state planning committee, which he chairs, approved the land conversion, Penang Island City Council did not grant the final approval.

On the purchase of his Pinhorn Road bungalow at below market price, he had said that Phang had not made a loss but recorded a RM300,000 profit, ànd the purchase was made on a willing buyer, willing seller basis.