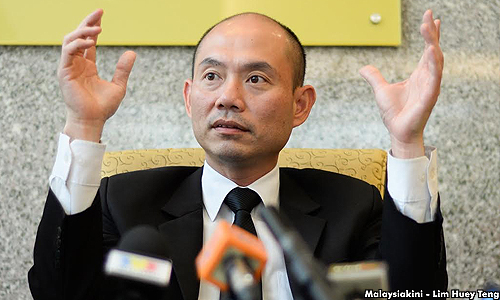 The Segambut MP said that a person convicted of a crime was usually sentenced to prison if he or she was found guilty after the defence is called.

“The sentence is always heavier at the end of a full trial," said Lim in a statement today.

"A monetary fine sentence or a lighter sentence is normally given by the courts if the accused pleads guilty at the beginning of the trial or at any time before the close of the accused's defence."

The Sessions Court in Kajang today found Abdullah Zaik guilty under Section 4(1)(c) of the Sedition Act over an article published on Isma’s website two years ago.

Judge Noridah Adam ordered Abdullah Zaik to pay a RM2,000 fine, or serve two years in prison if he failed to do so.

Responding to this, Lim believes that the judge had good reasons to issue the fine sentence.

Lim also urged Abdullah Zaik to apologise to all Malaysians over the offending article, 'Kedatangan pendatang Cina bersama penjajah British satu bentuk pencerobohan' (The arrival of the Chinese with the British colonialists a form of intrusion).

He noted that the Isma chief had not protested against the court's decision today.

“I would interpret it (to mean that) he accepted the court's decision that his ‘kedatangan pendatang Cina bersama penjajah British satu bentuk pencerobohan’ statement was utter nonsense.

“If so, he as a religious man and a responsible person should apologise to the Malaysian people in general and to advise others not to believe and repeat the statement,” said Lim.

The Sessions Court on May 16 acquitted Abdullah Zaik of his main charge under Section 4(1)(b) of the Sedition Act, for uttering seditious words with regard to the arrival of the Chinese and the British to Malaya.

His guilty conviction today is for an alternative charge, over the publication of the article.