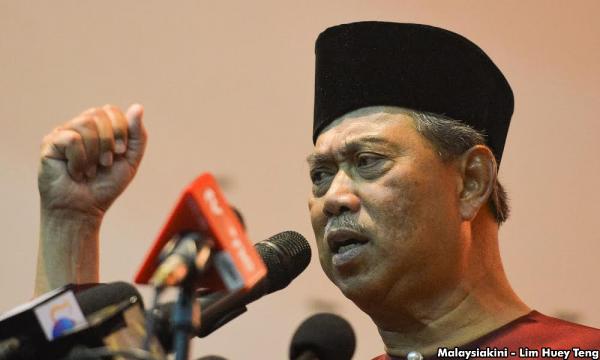 Zaid said the party will be all Malay/bumiputera, and is to be led by former deputy prime minister Muhyiddin Yassin, potentially paving the way for him to be appointed as the opposition's new prime minister candidate.

"A political party in this country can be based on one ethnic group so long as it’s not racist, narrow-minded and extreme in its actions.

"What we need is a Malay-based party that is inclusive and progressive, and that has all the attributes of a party of the future," Zaid wrote in his latest blog post.

As the opposition's prime minister-designate, Muhyiddin would fill a void in the Pakatan Harapan leadership, added Zaid.

This is because the opposition parties at present do not have one leader who can unite them all.

"The truth is they all think they are strong enough to unite the opposition and stem the lack of mutual trust that has marred their collaboration.

"But they are not," he said, citing as an example PKR and DAP's spat over plans to hold a snap election in Penang.

He reiterated his earlier stance that DAP's allies should support the proposed snap election.

Another issue that must be addressed is whether or not PAS should be allowed to re-join the opposition coalition, to prevent three-cornered fights in elections, Zaid said.

"If the opposition has a strong leader, then his or her view would hold sway in difficult decisions like this. Otherwise, the bickering will continue," he said.

However, Pakatan Harapan announced in September last year that Anwar Ibrahim is its candidate for the post of prime minister, if it wins the next election.

Muhyiddin, together with former Kedah menteri besar Mukhriz Mahathir, were sacked from Umno for their relentless criticisms against Prime Minister Najib Abdul Razak.

The Pagoh MP had at that time said he was still considering whether to set up a new political platform or join an existing party.