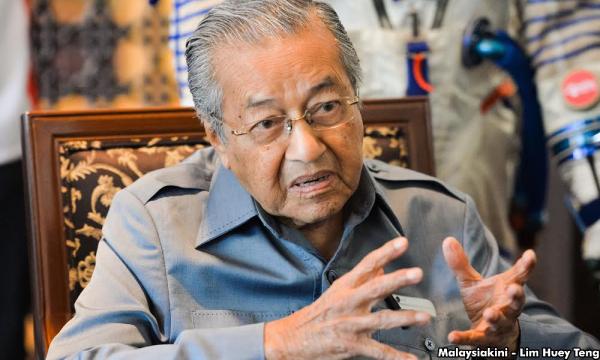 Former premier Dr Mahathir Mohamad has revealed his fondness for horses, disclosing that he owns close to 40, which were given to him.

In an interview with CNN Indonesia , the nonagenarian, as expected, also trampled on Prime Minister Najib Abdul Razak, whom he accused of being a stumbling block to Malaysia’s progress.

Quizzed on his leisure activities, Mahathir, who was prime minister for 22 years, said he had no time for hobbies or sports.

However, the former premier said he occasionally rode horses during his free time, a passion which has been well documented over the decades.

“I have a lot of horses, close to 40. Many people gave me horses. I did not buy them.

“I wanted to buy two horses from Pakistan, but when (then) president Zia Ul Haq heard about it, he gave me two horses,” he recalled.

On Najib, Mahathir claimed that the future of the nation would be adversely affected if the prime minister did not step down.

He said things would be better if someone else was at the helm.

“We wanted to be a developed nation by 2020, but this may perhaps be delayed because there are no direct efforts to develop the nation.

“The country is embroiled in all sorts of problems. But if Najib no longer leads and if someone else leads, there is a big possibility that the plans drawn up in the past can be implemented, especially Vision 2020,” he added in reference to his brainchild.

Najib’s camp, on the other hand, has accused the prime minister’s former mentor-turned-nemesis of attempting to topple the current administration in order to engineer the political ascension of the latter’s son, Mukhriz

Responding to another question on his ambition to become prime minister, Mahathir said when he was young, he did not harbour such dreams during the British rule as political participation was disallowed.

“When I was young, I wanted to improve myself by obtaining an education, and then perhaps securing a government job. Back then, nobody had political ambitions because there was no politics,” he added.

During the interview, Mahathir also spoke about his parents, disclosing how his father possessed an inextinguishable zeal for education.

“My father was someone who appreciated education. During the British era, he ran to school and not away from school, because his parents did not allow him to an English school for fear of him becoming a Christian.

“But he hid himself, and went to school because he considered education to be important,” he said, adding that his father, who later became a school teacher, had emphasised on him the need to acquire knowledge as well.

As for his mother, Mahathir said she had taught him about religion and values.

“(She told me) what I can do, and what I cannot as well as what is halal (permitted by Islam), what is haram (forbidden by Islam). All that came from her,” he added.