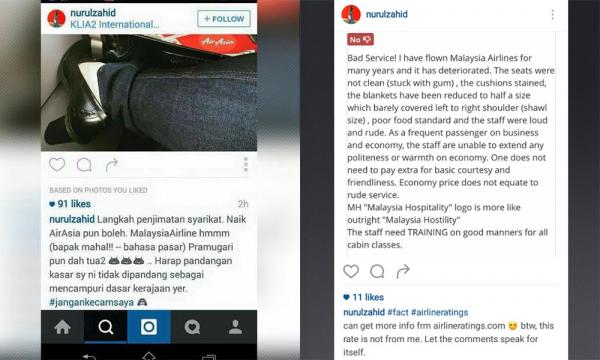 “It is unbecoming and has angered many Malaysia Airlines cabin crew members. As the DPM’s daughter, she must be more courteous in her comments on the social media.

“She should show sensitivity and watch her behaviour, especially with the rakyat,” National Union of Flight Attendants Malaysia president Ismail Nasaruddin said in a statement today.

Ismail said Nurulhidayah’s behaviour online reflected on her upbringing, and showed that her father is not people-friendly.

“As a woman, she should have considered the dignity of the stewardesses and fought for their rights as female workers, not condemn them,” he said.

Ismail said the Nufam office has received many calls from its members who expressed disappointment with what Nurulhidayah wrote.

She now has to use budget airline

In her posting, Nurulhidayah said her company is going through budget cuts so she has to fly with budget airline AirAsia instead.

She is head of Corporate Communications at Syarikat Perumahan Negara Bhd.

“Malaysia Airlines is super expensive and the stewardesses are mostly old. I hope my harsh views would not be seen as trying to intervene in government policy,” she quipped.

She also used the hashtag #jangankecamsaya (don’t condemn me) and laughing emoji. 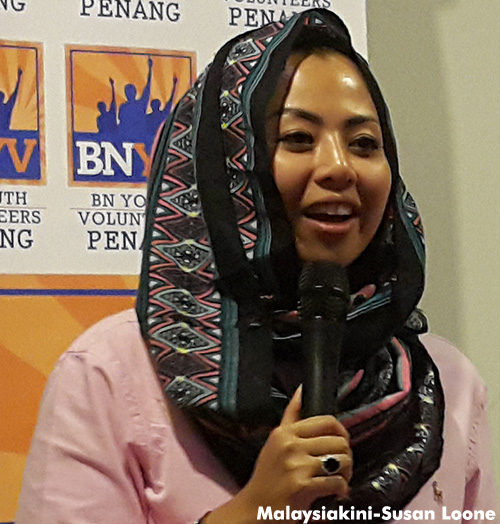 Nurulhidayah ( photo ) has since removed the posting, but put up a screenshot from crowdsourced ratings website airlineratings.com, about 2.30pm today.

The screenshot is of a reviewer giving Malaysia Airlines the thumbs down for rude service by the cabin crew.

“By the way, this rate is not from me. Let the comments speak for itself (sic),” she said, using the hashtag #fact.

In another posting at 3.08pm today, Nurulhidayah said she is sorry that Malaysia Airlines has staff who condemned her for the criticism.

"They took it personally rather than (using it) to improve. I don't just comment on my bad experience, but yes I do have friends (who have had) bad experience with them because they are nobody," she said.

"I am sorry for Malaysia Airlines."

Nurulhidayah earlier courted flak over her reaction, when challenged to do blue collar work.

This was after her father challenged Malaysian youths to do the dirty, dangerous and difficult work that foreigners are hired for, if they do not want an influx of migrant workers.

Retaliating, Nurulhidayah told those who condemned her to seek her forgiveness in the afterlife.

She added that she is not part of the elite and had also worked as waitress during her student years.