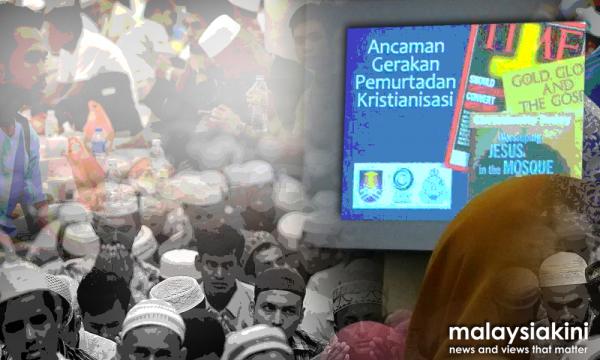 Christians are not a threat and portraying them as such at a seminar in a public university is “appalling” and “highly offensive”, the Christian Federation of Malaysia (CFM) said.

CFM chairperson Eu Hong Seng said while such offensive seminars have been held before, this one was especially so because of the involvement of the police which shows its bias.

“It is wholly unacceptable for a public university, utilising public funds, to undertake activities that demonise a religious minority. This is highly offensive.

“No government should condone such activity, and we are appalled by the seemingly irresponsible inaction on the part of the government of Malaysia in permitting this to have taken place,” he said in a statement.

Malacca police confirmed a Special Branch officer gave a presentation at an "anti-Christianisation" seminar at UiTM campus at Lendu, Malacca.

Eu said any discussion about alleged threats of “Christianisation” should take place openly, with participation from the Christian community.

“Academic freedom requires objectivity and balance, not a one-sided partisan rant and rave […]

“Let the allegations be supported with proper research and concrete evidence, not wild anecdotes and unverified assertions,” he said.

As such, he called on the government to put a stop to such “derogatory” activities and for the police to stay away from such events lest it is seen as lending credibility.

Yesterday, inspector-general of police Khalid Abu Bakar said there is no law preventing police from attending any seminar.

He was asked why police was jointly organising such talks.

Malacca police chief Chuah Ghee Lye said the talk was to “strengthen the faith” of Muslim students and does not have elements of sedition.

A participant, who spoke to Malaysiakini on condition of anonymity, said the seminar touched on the usage of "Allah" in the Bible, the pope, Christians in Indonesia and the Crusades.

The speaker told them that Christians are trying to convert Muslims by using the 3Gs – “gold, glory and gospel”, the participant said.