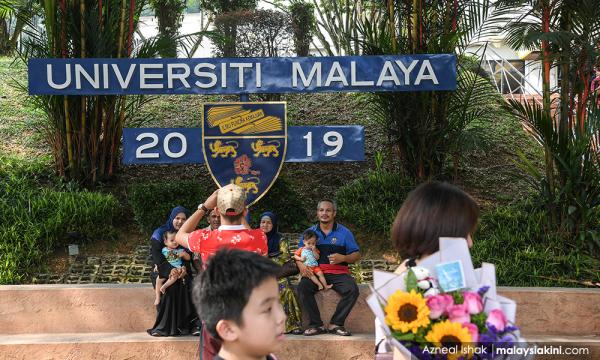 LETTER | The Agora Society strongly condemns the cowardice perpetrated by Universiti Malaya (UM) for lodging a police report against student activist Wong Yan Ke. The police report was made in light of a solo protest by Yan Ke calling for the resignation of the varsity’s vice-chancellor, Abdul Rahim Hashim. A protest of such nature certainly does not merit a police report, but it would only serve to jeopardise whatever goodwill or reputation that UM still has left.

The Agora Society is gravely disappointed that the once-great education institution had since resorted to the police to help investigate its own student for expressing his views about the vice-chancellor. It is to our view that UM, being the most prominent university in Malaysia, does not deserve to be associated with values such as open-mindedness and professionalism which are ironically on full display on their official website.

This did not in any way disrupt the flow of the event that day. Therefore, Yan Ke did not in any way disrespect the ceremony but it has inadvertently ruffled a few feathers of the powers-that-be in UM. If UM is unable to tolerate criticism and dissent from a lone student, then it is debatable that UM can truly live up to its ideals of being an internationally renowned institution of higher learning in research, innovation, publication and teaching.

The Agora Society also strongly disagrees with the fact that Yan Ke’s action has tarnished the reputation of UM as alleged by the latter. Yan Ke’s defence for a more tolerant UM and Malaysia should be applauded instead and a reputable university should instead defend any student with progressive stance like Yan Ke. The only move we have seen that is tarnishing UM’s reputation currently is the police report made against a recalcitrant student and defending a purportedly racist vice-chancellor.

Furthermore, UM has since followed up its police reports by barring another fellow student and associate of Yan Ke, Edan Kon Hua En from attending his convocation ceremony for fear of disrupting public order. Edan has promised that he would not be protesting by displaying a placard but to no avail. The Agora Society questions the need for such harsh actions for denying a student his finest moment in university when he himself has promised there would be no protest during the ceremony.

Subsequently, Yan Ke was also worried that he might not be receiving his transcript for openly defying the vice-chancellor. Given that UM’s recent attitude towards dissent and Yan Ke’s transcript had been mysteriously smudged and experiencing printing difficulties in publication, the graduate’s worry is not unfounded and the Agora Society wants to remind UM not to engage in personal and petty revenge for denying a fellow young graduate’s four years of achievement.

The Harapan government’s response has been equally damning as they were calling for academic freedom and a more tolerant Malaysia during the last general election, yet they were nowhere to be seen in this whole incident. It is also disappointing that the police have since taken action by summoning Yan Ke for further investigation.

It is undisputedly clear that what Abdul Rahim Hashim had uttered recently is not befitting for the so-called "New Malaysia" and his views should be rebuked and challenged. Criticisms against UM and the calls for the resignation of the vice-chancellor stemming from civil society and the public have since risen and the Agora Society is unequivocally supportive of them.

We also wish to state our solidarity with all the students who harbour the same view as Yan Ke. Lastly, we remind UM that a university is a place that embraces diverse and thought-provoking ideologies and debates them professionally and rationally. Thus, we urge UM to withdraw its unnecessary police report if it still harbours any intention of defending academic freedom and its reputation.

The Agora Society Malaysia is a loose network of individuals who believe in the principles of democracy and good governance.