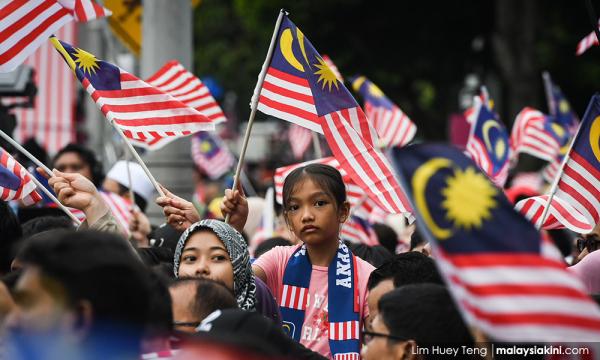 LETTER | As Malaysians celebrate the 62nd anniversary of Merdeka for Malaya in 1957 and the 56th anniversary of the founding of Malaysia in 1963, let us give thanks to God for leading our multiracial, multicultural and multireligious nation through these many years of progress and also through some difficult challenges.

Our government has enunciated a new vision of shared prosperity for Malaysia. If this vision is to be realised to benefit all Malaysians including our indigenous people and the poor and marginalised, we need to major on the majors and not labour on the minors.

With a national debt at the RM1 trillion mark, an ongoing trade war between the two largest economies of the world and uncertainties in Europe after Brexit, a trading nation such as Malaysia must not lose time on issues which impede its restoration and growth.

As a nation of diverse peoples, cultures and religions, we certainly cannot afford to be rent asunder by those who threaten our peace, harmony and unity.

Our leaders must rise up to strongly and courageously spearhead a concerted effort to stamp out extremist communal and religious rhetoric and hate and divisive speeches before hearers are incited to commit criminal acts undermining peace and public order.

The police and all in authority whether at the federal or state levels must not shy away from their responsibility for maintaining the peace of this nation.

As our home minister rightly said: “Malaysia is a multiracial country with various races and religions. All people living in the country should respect and celebrate diversity in the country.”

Already the exuberance and hope which buoyed us up only a mere 15 months ago after the 14th general election is giving way to disappointment, dismay, distrust and discontent and racial and religious tensions which jeopardise the unity which we need to take our nation forward.

Commendably, the government has begun to put in place policies and structures to give substance and meaning to aspirations for good governance, integrity, accountability, transparency, separation of powers and the rule of law but much more needs to be done and done quickly if its reform agenda and the dream of Malaysia Baru are to be realised.

With the lowering of the minimum voting age to 18 years, eight million young Malaysians will need the wisdom and knowledge to vote responsibly in the next general election.

Visionary policies to reform the education system need to be implemented speedily, objectively and with courage especially if we want to compete on the global stage and migrate to a digital economy to take our place in the Fourth Industrial Revolution.

Even as our new government is a Coalition of Hope, we continue to look to our God of hope and pray for a truly transformed nation where mutual respect and affirmation of one another is the norm; authentic dialogue conducted with humility and grace for the resolution of differences; and for the realisation of our vision of all Malaysians embracing each other as one and never as us and them.

Let us continue to pray to God that wisdom, strength, courage and good health be granted to our Yang di-Pertuan Agong, the rulers, the governors, the prime minister and the cabinet members, the state menteris besar and chief ministers and members of the executive councils, and all our MPs and state assemblypersons, that long may they serve the rakyat with unswerving integrity and an undaunted determination to seek the common good of all Malaysians at all times.