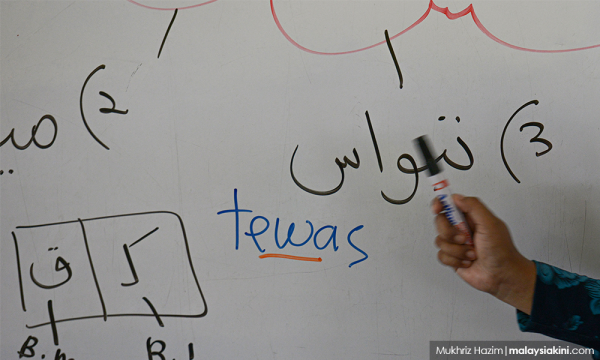 Khat issue is not 'simple as that'

LETTER | In reference to Sabah Education and Innovation Assistant Minister Jennifer Lasimbang’s statement today where Sabah would not object to the decision made by the Education Ministry to introduce khat (Jawi calligraphy) in vernacular schools nationwide, she said, “Sabah has little say in the matter [...]”

Okay, help me out here ... I am somewhat confused nowadays when I read the news. All these mixed messages that have been thrown around.

Earlier this month, Sabah DAP came up with a statement stating that Sabah DAP wants the matter in Sabah to be left to Sabahans to decide. The statement was signed by two MPs, five assemblypersons and one appointed assemblyperson.

So which is it, guys? Seems like it has come to a point where national-level parties the likes of DAP and PKR are rising to the challenge, championing the rights of Sabahans to determine their own fate while the Sabah-based party Warisan with its staunch slogan of "Sabah for Sabahans" in the run-up to GE14 is now laying down their arms, limp and lifeless, and telling us that, "Sabah has little say in the matter. So the state will follow the national education policy, simple as that".

Like a ceremonial sword void of tests in the field, the "Sabah for Sabahans" theme is indeed proving to be as hollow and shallow as I expected.

The assistant minister also said that she advised those against the policy to think of it as an opportunity to learn a new “language” instead of being overly "emotional”.

Speaking from my point view as a mother of four children who attend vernacular schools, my children are learning BM, English, Mandarin and at home, if they can manage it, Hakka the dialect generally used by my family.

If I have to opt for them to learn another language, I would rather they learn the language of our indigenous natives like the Dusun or Kadazan which are the pride and joy of our multi-diverse Sabah!

YB, it is not about being emotional. It’s about being practical and pragmatic about the whole matter. Simple as that!