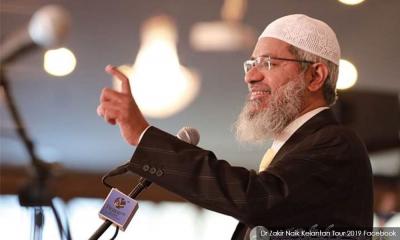 Philosophy of Zakir Naik and his speeches

LETTER | Dear Dr Zakir Naik, have you ever heard of any religious debate anywhere around the world? I have not.

Perhaps there is and I am not aware of, but it is definitely not an event that is televised or given enough attention and publicity worldwide.

Dialogues and debates are not similar. A dialogue seeks to find a solution to a problem with clear objectives, while a debate seeks to win an argument - a zero-sum game.

The essence of any religious beliefs is exemplified through the conviction and action of the believer. They are influenced by religious practices and spiritual enlightenment that are personal and sacred to that religion. This is where I think led you to misjudge your remarks.

First of all, Buddhism and Christianity alike (and many religions), do not engage in confrontational debates and argument on their religious practices, let alone compare their religious beliefs.

How can you use the practices of another religion as an example to accurately personify the righteousness of one over the other, when you do not embrace the essence of that (other) religion itself? Hence, you are not qualified to use it, because you will never know it well enough to criticise it.

Most surely, whatever you say to non-Muslims will be misunderstood, because they are understood from a different perspective under a different context - and there is nothing to justify that misconception, except that they are viewed through different belief systems.

You cannot compare an apple with orange just because they are both fruits - because they don’t look alike, taste alike and have different nutritional values - favoured by different people with different tastebuds.

As such, using other religion or race as examples to justify superiority does not build credibility, but contempt. It will only create animosity and discontent, achieving no harmonious outcome - against the virtues of any religion.

So, please stop asking us to see your videos or engage in religious debates.

In Malaysia, we restraint ourselves for making these comparisons, because we understand and respect the different belief systems and are careful not to encroach it.

So, if you have respected other religions (and races), you would have stopped using them to compare when you preach.

It is clear you are just a guest who knows nothing of Malaysia, to be fit enough to preach in a country like ours.