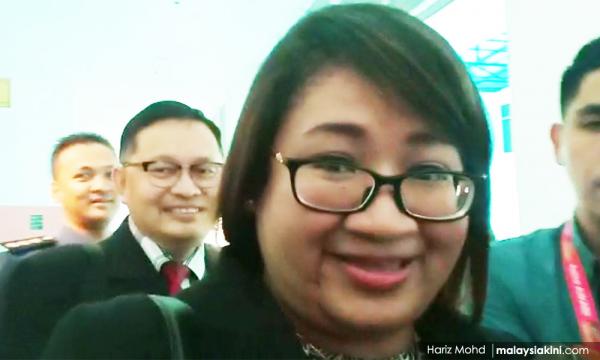 Syazlin must be reinstated as counsel in Adib inquest immediately

LETTER | The Malaysian Alliance of Civil Society Organisations in the UPR Process (Macsa) is extremely concerned with the current turn of events pertaining to the inquest of into the death of firefighter Muhammad Adib Mohd Kassim.

It was reported that the independent counsel Syazlin Mansor who was appointed by the Housing and Local Government Ministry to represent the Fire and Rescue Department announced her shock withdrawal from the inquest allegedly of her own accord, but seemingly due to pressure exerted upon her from various quarters.

More shocking and unacceptable to us all in this day and age is the allegation that she had to withdraw due to interference of a dubious nature from clandestine and destructive elements as well as due to threats upon her safety, security and well-being.

We believe the circumstances leading to her withdrawal from the case to be fraught with anomalies, giving rise to reasonable suspicion that the inquest is being tampered with by interested quarters desirous of its derailment.

This is especially so in light of testimony by the forensic specialist and independent expert witness Shahrom Abdul Wahid who was coincidentally called by the said counsel.

Evidence tendered by him at the inquest had contradicted the position taken by the Attorney-General Tommy Thomas that the late firefighter's death was not by assault and battery leading to murder, but a mere accident, as contained within an affidavit sworn by a representative of the Attorney-General’s Chambers when the same opposed the application to intervene by the Seafield Hindu Temple committee made a few months ago.

We have had opportunity to peruse public statements issued by Housing and Local Government Minister Zuraida Kamaruddin and that of the AG in respect of this affair, and verily believe their justifications in respect of Syazlin’s role in the inquest to be superficial and unsatisfactory.

We further reiterate that the issue of whether there is conflict of interest does not arise as based on the observation made by Court of Appeal in the case of Teoh Meng Kee v Public Prosecutor [2014] 5 MLJ 741 has affirmed that an inquest is not a criminal trial, and thus being inquisitorial in nature, the question of parties submitting thereto having interests that conflict does not arise, and to suppose so merely by extraneous circumstances, such as the reaction of the public, is a fallacy and not an excuse for this erroneous supposition.

This fact was also ostensibly known to the AG, since the appointment as well, and not once did the AGC make any objection thereto back then.

We are also mindful that is not unknown practice for government departments and ministries to engage counsel independent of the AGC in handling legal matters, including representing them at inquests, and there is no need for a fiat issued under the Government Proceedings Act 1956 for this as the said department would be represented in a private, and not public, capacity.

This was indeed done in respect of the late Ahmad Sarbani Mohamed who was a customs officer found dead within the premises of the MACC, which under the Malaysian Anti-Corruption Commission Act 2009 is a statutory body. MACC is on record appointing Muhammad Shafee Abdullah as their independent counsel for that matter.

The instruction by the AG with respect to Syazlin's withdrawal coming only at this point during the inquest is not only arbitrary and made on a whim, but highly suspect, and threatens to derail the whole process, casting asunder the noble goal of attaining justice for the late Adib and torpedoing any attempt at clarifying the whole Seafield temple fracas for the interest of the public.

This observation is further solidified by the position taken by the AG, the government forensic expert Dr Ahmad HafizamHasmi and by extension, the government as a whole, thatt he late Adib’s death was not murder but a mere accident.

There is also the AG's grave and partisan assertion, made in his statement that Syazlin’s active partaking in the inquest contradicts the position taken by the various DPPs assigned by the AGC in respect of the case.

It is abundantly clear to all and sundry within the legal profession that is not the duty nor responsibility of independent counsel to take instructions or directions of any manner by the AG as this would threaten their independence and negate their responsibilities towards their client as well as prejudice their duties as officers of the court.

Such counsel are bound only by the wishes of their client, in this case, the Housing and Local Government Ministry. The AG and the government must not interfere with any instructions or duties an appointed legal counsel has towards her client and the court.

Syazlin must be allowed to perform her role freely and without interference by the state, as required by the UN Basic Principles on the Role of Lawyers, Principle 16 of which requires that the government ensure that lawyers are free to perform all of their professional functions without intimidation, hindrance, harassment or improper interference as well as being free from suffering the consequences of or being threatened with, prosecution or administrative, economic or other sanctions for any action taken in accordance with recognised professional duties, standards and ethics.

We thus call upon the AG to rescind immediately his instruction to the ministry in discharging Syazlin as independent counsel and make appropriate restitutions by ensuring her immediate reinstatement thereto and give her due guarantees in respect of her safety and security.

It is also manifestly clear that by instructing Syazlin Mansor’s withdrawal, the AG has been interfering with the process of the inquest, a power not conferred by him by any provision of law.

The AG is duty bound to uphold the rule of law and exercise his discretion in a manner permitted by law.

The decision by Thomas in instructing the dismissal of Syazlin as counsel for the ministry is arbitrary, runs afoul of due process and is disproportionate given the gravity of the inquest proceedings and public interest therein. It is only right then that he must immediately and honourably resign his position as AG.

We have also perused the statement of the Malaysian Bar made on 1 June 2019 in respect of this matter and note with deep regret and extreme concern that the Bar has, despite acknowledging the inquisitorial nature of an inquest, chosen to side with the AG and has made a poor attempt at justifying his instruction to dismiss Syazlin  from her capacity representing the Ministry at the inquest.

This unwarranted, uncalled for and indefensible partisan act and favouritism on the part of the Malaysian Bar runs afoul of its statutory duty to uphold the cause of justice without fear or favour pursuant to section 42(1)(a) of the Legal Profession Act 1946 and calls into question the commitment of the Bar to its role as an independent check upon arbitrary exercise of power by the authorities.

The Bar is best minded to reiterate its call made just over a year ago by its then president, George Varughese, for the role of the public prosecutor to be separated from that of the AG in line with the manifesto of the new Pakatan Harapan government and do its best to ensure this government implement this and other stated institutional reforms.

The position of conflict between the role of the AG as counsel to the government and his prosecutorial duties that come with the office of public prosecutor must quickly be resolved, and these events have shown that indeed, we believe, that the AGonce again finds himself in a position of conflict of interest with respect to these two fundamentally irreconcilable roles.

We thus call upon the Malaysian Bar to reaffirm the urgent and pressing need for the two offices to be separated immediately and ensure that independent, reputable persons with no discernible conflicts of interest be appointed thereto so that rule of law may be upheld and the demands of justice be met in the New Malaysia.

AZRIL MOHD AMIN and RAFIDAH HANIM MOKHTAR are the chairperson and co-chairperson of the Malaysian Alliance of Civil Society Organisations in the UPR Process (Macsa).