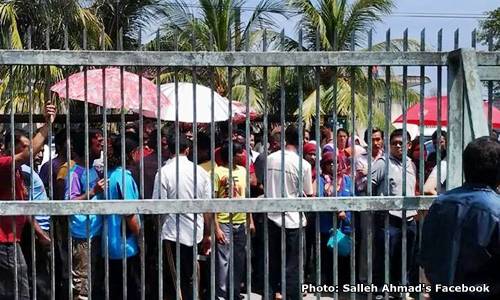 We should be ashamed of how we treat foreign workers

LETTER | In Malaysia when issues of 'religious sensitivity' or 'racial injustice' raises their head, public protests are quick to follow.

This results in immediate redress including fast-tracking decisions through the executive and judicial hallways.

However, when it comes to decades of despicable human rights abuses especially those cases involving foreign labourers, we cannot say the same.

For decades we have relied on cheap foreign labour to build a 'progressive' Malaysia.

But despite benefiting and profiteering from cheap, imported, legal and illegal migrant workers, we don’t have a solid track record of punishing Malaysians who abuse them.

A case in question is that of the Indonesian maid who died after despicable human abuse bordering on torture.

A year after the death of this Indonesian maid who was forced to sleep outside next to a dog, her mother still continues to cry out for justice.

Why do we need 12 months to see justice dispensed? And why do several other cases of abuse languish in Malaysia’s courts?

Our Human Resources Minister M. Kulasegaran emphasised recently that Malaysia was ready to “declare war” on human trafficking and forced labour, and that a review of labour laws was underway.

But as Glorene Das, executive director of migrant rights group Tenaganita fairly stated "a year later there is still no justice”.

“This is not an isolated case. We have a number of cases filed in court for unpaid wages, wrongful dismissal and deductions ... but these cases just stay there".

The question is why? Indeed, why are Malaysians so indifferent to the unresolved cases that are already in the public domain?

Why do we have this attitude towards the scores of reported (and probably thousands of unreported) cases of abuse, torture and cheating of our migrant workers?

Where is our national resolve to shine as an exemplary nation for the protection and nurturing of human rights and dignity of labor?

When it comes to our own rights - be it economic or social, we will take action.

When it comes to some foreign nation's political issues, we will march in the streets and burn effigies in the name of (politicised) brotherhood.

But in our own backyard, we prefer to look the other way.

For decades we were unable to put laws ahead of the cart but all we continue to hear is the same tune of assurances that “a review of labour laws is underway.”

We Malaysians should be ashamed, very ashamed.