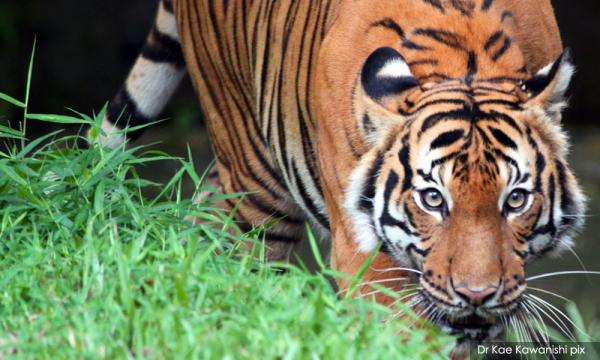 LETTER | Since assuming office as the Minister of Land, Water and Natural Resources, Dr Xavier Jayakumar has been vocal on conservation issues especially those pertaining to wildlife. His initial “shoot on sight” suggestion against poachers shows his seriousness in wanting to confront this menace that is endangering our wildlife that is on the verge of extinction.

The plight of Malaysian wildlife, especially the fast dwindling tiger population, is uppermost on his mind and he has advocated tough measures to contain deforestation, loss or fragmentation of habitat and hunting and trafficking of wildlife.

Malaysia’s tiger population has drastically declined to less than 200 as compared to more than a 1,000 a couple of decades back. The Malayan tiger, known for its prowess, is now dependent on human kindness to save it from becoming extinct and history.

It is surprising to note that whereas tiger numbers have increased dramatically in India, China and Russia, the drastic decline in South East Asia especially Malaysia in just over a decade is bewildering. Malaysia appears to be the favourite haunt for the hunting and trafficking of rare species.

Generally, Malaysians have a strong feeling and sympathy for endangered wildlife but this is not the case with poachers and traffickers both local and foreign who are hell-bent on the good returns the notorious business brings. It is probably becoming too late to save the Malayan tiger.

The cubs are in an even more pitiful situation in that they are fighting against nature from the time of birth as they have to confront many dangers on their way to adulthood. Nowadays, there is the additional danger of snares and traps. Only a small percentage survive unless well-intentioned researchers and rangers intervene.

A large number of tiger cubs need to survive and grow into adults if the tiger population is to rebound.

Nursing or lactating mother tigers need to be helped and provided with food nearby such as placing a deer, monkey or wild-boar carcass to ensure it does not over-strain itself in the endless search for food. The longer the mother is out in search of prey, the greater the risk for the cubs as male tigers are known to engage in infanticide and kill the cubs. There is also the danger from other animals.

This artificial food supply can be stopped once the cubs are mature enough to follow the mother in their hunt for prey. Also, medicine such as antibiotics and vitamins could be embedded in the carcass to ensure that the mother tiger stays healthy during this vulnerable period. It is necessary to opt for these artificial methods to stop the decline in their numbers.

In Malaysia’s dense equatorial jungles, it is difficult to spot or chase prey, and the scarcity of prey makes it doubly difficult for the tiger.

More researchers, local and foreign, as well as NGOs, the politicians, community leaders, corporate sponsors and others can help save the tiger. Present-day technological advances such as motion and night vision cameras, drones as well as genetic breakthroughs can put off the prospects of extinction. The government needs to provide more funding and enforcement through a more multi-racial group of forest rangers from Perhilitan and from the armed forces to patrol and protect the tiger sanctuaries.

According to local tiger expert and conservationist, Kae Kawanishi, at least about 2000 members of the armed forces are needed to fully patrol and protect the tiger sanctuaries. The Orang Asli and the village folk living in areas bordering tiger sanctuaries need to be roped in for this effort. All hunting permits should be immediately cancelled no matter how numerous the wild boar, deer and other prey animals that form the tiger’s food supply. “Shoot on sight” signboards should be placed in tiger sensitive areas to forewarn poachers, hunters, villagers and others. Curfews should be imposed from dusk to dawn in the tiger preserves. Roads, previously constructed by timber loggers, should be blocked or sealed off by digging trenches across them to prevent easy access to the jungles.

Roads and highways - particularly the East Coast Highway and the East-West Highway- along wildlife inhabited areas especially at frequent tiger or elephant crossings should not have railings, drains, hedges or fences to ensure that these animals can cross safely and quickly. More signboards for motorists to reduce speed and to be on the look-out for wild animals crossing the road should be put up.

More AES cameras are needed at these spots and fines should be doubled for speeding. The toll plazas and gantry signboards, too, can display wildlife-related messages on the LED boards to alert road users. All these can help prevent accidents and save our precious wildlife.

If India, despite its socio-economic needs can allocate enough space and funds for their tigers, there is hope yet for the Malayan tiger to recover from its population decline. All that is needed is the political will on the part of the new government to protect and do the best for the tiger’s survival. The oldest jungles in the world - about 350 million years old – could become eerily quiet without the Malayan tiger’s roar.