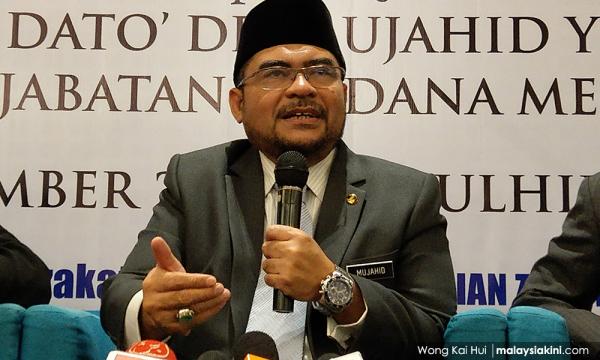 LETTER | G25 wishes to congratulate Minister in the Prime Minister’s Department Mujahid Yusof Rawa for his enlightened views about what lies at the heart of Islam. According to him, Islam is about compassion for all (rahmatal lil alamin) and inclusiveness towards others.

Respect for all religions is a cardinal principle of Islam. G25 lauds the determination of the minister to protect the freedom of all faiths. This is in line with the Quranic declaration in surah Al-Kafirun 109:6: “Unto you your religion, unto me mine.”

The essence of Mujahid’s interview with The Star is to promote Islam as a religion of compassion, justice, mercy, moderation and inclusivity, all in line with the Quranic principles of wasatiyyah (moderation)  and maqasid al-syariah (objectives of syariah) , which we in G25 fully support.

The minister acknowledges that Islam is compatible with change and progress. Islam can accommodate dialogue and differences. It can coexist with democracy and human rights. It does not stand in the way of loyalty to one’s country and to the diverse and dynamic world we all inhabit.

He must be congratulated for admitting that urgent reforms are needed in the governance of religious affairs in this country. He acknowledged that in some spheres, like enforcement of laws dealing with khalwat (close proximity) and other sexual offences, there has been overzealousness, abuse of power, lack of compassion, failure to take mitigating factors into consideration, and adoption of extreme measures like the caning of women.

Some states are competing with each other to showcase the imposition of corporal punishment as the mirror of Islamic justice. In the process, they are bringing infamy to Islam and painting the religion as lacking in compassion and justice.

The minister has correctly pointed out that in relation to child marriages and the establishment of tahfiz (religious) schools, there has been serious failure to follow guidelines.

G25 applauds the minister’s enlightened view that though Islam clearly defines what is right and what is wrong, Islamic jurisprudence imposes some limits on the power of the state to intervene in matters of private immorality. The minister’s view is entirely in line with a long line of classical juristic writings.

For example, any failure to perform religious duties on the part of a Muslim is a consideration only between him and the divine and beyond the scope of the state. Committing a sin in public amounts to a crime that merits worldly punishment, but committing sins in private is beyond the scope of governmental scrutiny. Islam forbids spying into the private lives of people (Quran: 49:12).

Every individual has a right to privacy subject to the rule that personal or private matters which are visible in the public realm are liable to scrutiny. However, this does not extend to matters, such as surveillance and spying, even on the authority of the state. Islam recognises bodily privacy, communication and informational privacy and territorial privacy.

The Prophet, according to the hadith of Amir Mu'awiyah remarked, "If you try to find out the secrets of the people, then you will definitely spoil them or at least you will bring them to the verge of ruin."

As is to be expected the hardliners within the state syariah establishments have unleashed a vitriol of attacks against the minister. He has been accused of trespassing on state jurisdiction. Actually, the minister appears fully aware that in our federal-state division of powers, many aspects of Islam are in the hands of the sultans, the syariah courts and the muftis, and are not within the jurisdiction of the federal government.

What the minister is trying to do is to promote a dialogue on issues which misrepresent Islam as a religion obsessed with prohibitions and punishments and not with mercy, justice and compassion.

His endeavour to negotiate differences and to build bridges between opposing views is in contrast with the dominant tendency in Malaysia today to prohibit, punish and demonise any diversity of views and to resort to severe thought control of the ummah.

One mufti accused Mujahid of forgetting that preventing evil is the “perjuangan” (struggle) of Islam. Indeed, the Quran is replete with rules for all believers to ordain good and forbid evil (al-amr bil-ma'ruf wan nahy 'an al-munkar).

But it is over-simplistic and crass to treat the prevention of evil as the supreme struggle of the syariah. According to American scholar Imam Feisal Abdul Rauf, the features of syariah-compliant governance are the following: there must be recognition of the supreme authority of God; the leader should have taqwa (piety), hikmah and ‘ilm (wisdom and knowledge) and adalah (justice).

Legitimacy of the government must rest on bayah (consent). Decision-making should be based on consultation or shura. There must be elimination of hardship and causing of harm. Support must be provided to the oppressed. Corruption must be controlled. There must be equality, independence of the judiciary, individual and collective freedoms relating to life, mind, religion, family, property, trade and commerce and honour and personal dignity.

In Surah al-Baqara 2:177 it is stated beautifully that righteousness is evidenced in a myriad of ways. “It is not righteous that ye turn your faces to the East and the West; but righteousness is in one who believeth in Allah and the Last Day and the Angels and the Scriptures and the Prophets; and giveth wealth in spite of love for it, to relatives and to orphans and the needy and the wayfarer and to those who ask, and to set slaves free; and observeth proper worship and payeth the poor-due. And those who keep their treaty when they make one and those patient in tribulation and adversity and time of stress. Such are they who are sincere…”

It is one of the imperatives of the syariah that we observe moderation in behaviour and mercy, compassion, justice and proportionality in punishment.

The sanctity of every individual’s privacy is well recognised in Islamic law. The Quran (49:12) rebukes those who wish to pry into matters which do not concern them, or harbour suspicions in respect of others, conceding that some suspicions can even be considered crimes. This implies a prohibition of circulation of information pertaining to an individual's private sphere (24:19). According to this verse, giving wings to immorality is worthy of punishment.

The Sunnah also emphasises privacy in communications. The Prophet once said, "He, who looks into a letter belonging to his brother, looks into the Hellfire" (Abu Daud, Book 8:1480).

The Quran (24:27-9) forbids entering another's house without permission. It seeks to ensure that a person visiting another's house is welcome in that house. Further, the Quran (2:189) envisions visits made to other's houses only through the front door and after three greetings. Clarifying the reasons for such rules, the jurist Bukhari offered the following explanation, "The first greeting is for the residents to hear the visitor, the second is for the residents to be cautious (fa-ya khudhu hidhrahum), and the third is for them to either welcome the visitor or send him away."

The right to privacy within one's home is extended to privacy in respect of sinful behaviour within his private sphere. The accountability of a Muslim to his fellow humans lies only in respect of his public actions.

This is illustrated by an interesting story about Hazrat Umar ibn al-Khattab. Umar climbed the wall of a house on the suspicion of wine being consumed within the premises. On his suspicion being confirmed, he chided them for their conduct. They then reminded him that while he pointed out their sins, he himself was guilty of three sins; spying on them, failing to greet them and also not approaching their house through the front door. Umar agreed with them and walked away.

Contrast this with vigilante squads breaking down doors or entering houses through the roof. It is clear, therefore, that the application of the syariah in Malaysia disregards some of our classical ideals. Mujahid is justified in giving us a reminder and seeking a dialogue with those who disagree.

Our prime minister’s comment on Mujahid’s interview indicates that he does not support the government using its power to intrude into the private sphere of individuals. The sins that men and women commit behind closed doors will be punished by God.

It is not the government’s role to play God. Its role is to protect the safety, peace and security of citizens and the nation.

Finally, G25 wishes to remind our religious authorities that in the global competition for trade and investment, it is important to show we have the right policies in place and that our laws are in line with international values of justice.