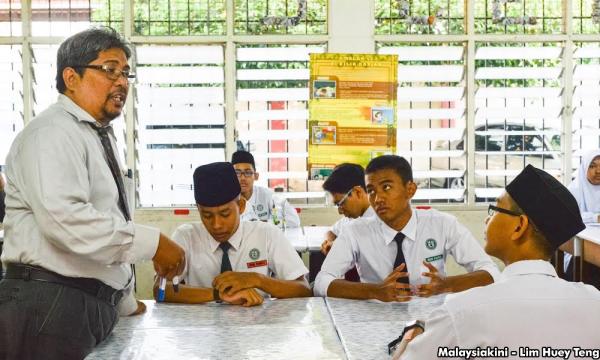 LETTER | Let me first congratulate all Malaysians for being courageous enough to stand up for what is right and for bringing about a change in our beloved nation.

One factor (whether big or small) which has contributed to this change has to be our education system.

As an educational practitioner myself, I have often been asked as to why the Ministry of Education (MoE) keeps flipping between exams and non-exams; the use of English in the teaching of Science and Maths to returning to use BM in these subjects; school-based tests and centralised exams; IT emphasis with limited facilities; incompetency of the English language teachers in schools, just to name a few.

What most people do not understand is that teachers are not policy makers. We are merely trained to implement policies drawn up by MoE. Many policies are good and ideal only if the teachers are given time to embrace the policies and slowly implement them.

Sadly, after more than 35 years of teaching, I have seen so many policy changes that it has become a norm for us to expect a change every time there is a new education minister.

When I first started teaching in 1984, there was a fear instilled in me regarding the visit of the school inspectors which occurs once a year. Teachers were given trust and due recognition to carry out our duties the best way we felt possible.

Today, we are bogged down by visits from the school inspectors, the school coaches, officers from the PPD, the State Education Dept and from MoE itself. We are made to feel as though we are not to be trusted to do what we have been trained to do.

The visits from all these agencies never fail to claim that they are in schools to help the school. Yet, in telling us where we went wrong, the officers leave so many teachers feeling extremely discouraged. We are made to feel like failures!

To add to the misery, we are called to attend meetings, seminars, conferences organised by almost every ministry in the government and sometimes even NGOs.

It is a norm these days to have at least two or three teachers who will not be in school on a daily basis because of Pejabat Pendidikan Daerah/Jabatan/MoE involvement. How can schools run with teachers being taken away so often for meetings outside the school!

I was personally told off by a young officer for not allowing one of my teachers to attend a short meeting for a small event with a threat that action could be taken against me. To me, the school is my priority.

Discrimination against ethnic minority teachers is another norm. Most teachers of ethnic minorities have given up their quest to be leaders – even though many have completed everything needed for them to qualify as heads of schools.

Promises after promises are made. Annual appraisals are excellent every year. Excellent service awards are received several times but when it comes to promotion, we find that it is only meant for some.

There is absolutely no celebration of meritocracy in MoE's appointment of heads of schools. Frankly, most of the ethnic minority teachers feel like the post of principals is only meant for a certain race and religious group.

How do we make our national schools become schools of choice when we still practise such discrimination and turn our schools into religious institutions! Someone once said that the madrasahs can be put to shame when they enter our SMKs because of the strong religious environment that is evident in our schools.

I have nothing against strong religious beliefs and culture but all races and religion must be respected and embraced. The domineering presence of one single religion puts off many parents from placing their children in our schools.

The dominant presence of teachers of a single race in our schools is another factor. Having a good mix of teachers of different races helps to encourage students from minority groups to remain in public schools.

I would suggest allotting teachers based on the population proportion i.e: 66% Malay teachers, 23% Chinese teachers, 9% Indian teachers and 2% other ethnicity teachers.

With a fair mix among teachers and principals, it will surely make the nation see some form of fairness and equality. This will certainly promote attendance in public schools and make them the schools of choice.

The Malaysian Education Blueprint spells out its aims and aspirations so clearly but they are so far from being achieved as we still experience so much discrimination.

My prayer is that the New Malaysia will be a more Fair Malaysia.