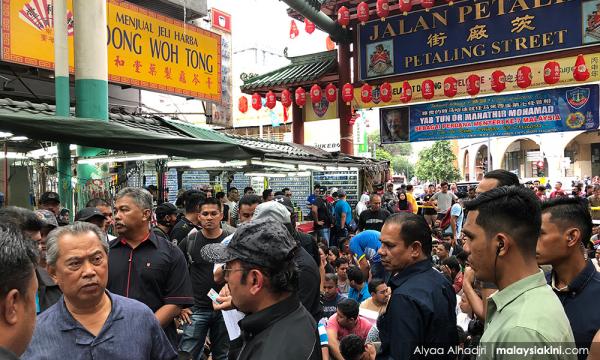 LETTER | In response to the ongoing enforcement operations on undocumented migrant workers by the Immigration Department, we the migrant community and civil society organisations concerned with migrants’ rights are very concerned about the future of migrants in the country.

The directives in Home Minister Muhyiddin Yassin’s press statement fails again to address the root causes of the issues and do not provide enough time for proper discussions and analysis for just remedies which need to be holistic, comprehensive and be based on the International Labour Organisation’s conventions and fundamental human rights principles.

These concerns also cover refugees, asylum seekers and stateless communities, who are also at risk of being detained during these enforcement operations.

Many of the migrants the Malaysian government has labelled 'illegal' (or in more humane terms 'undocumented') attain that status due to no fault of their own. Some of these reasons include:

Trafficking: Malaysia’s history as a human trafficking hub is well documented by civil society and even reflected in government data. Recent revelations regarding a large and politically well-connected trafficking syndicate, as well as Malaysia’s downgrade to the Tier 2 watch list of the US State Department’s Trafficking in Persons report further reinforces our fears of the prevalent and possibly even systemic existence of trafficking networks within Malaysia.

We must never punish migrants who became victims of trafficking to Malaysia, as their circumstances are beyond their control. Criminalising victims and survivors is not the way to go; we should instead be going after the syndicates and those responsible.

Deception: Agents have a history of giving false advice and promises regarding the process of getting permits and jobs in Malaysia. Some migrants have low literacy levels, making them susceptible to fraud and deception, and even literate migrant workers become possible victims of fraud and unjust treatment by both recruiters and employers.

Recruiters promise work permits and good employment contracts with decent wages and conditions. Upon arrival, however, these workers often find that not only have their contracts, employment sites, and terms and conditions been changed, but that they may have also violated Malaysian immigration laws. For most workers, there is little access to justice or right to redress mechanisms in proving the fraud and deception.

Rehiring: The rehiring process is lengthy and non-transparent, and the subcontractors and sub-agents of rehiring face little accountability. It is a privatised process driven by profiteering, fraud and deception.

For example, workers are not given receipts of rehiring payments and many agents cheat workers, taking their money but not providing e-cards. There is no adequate redress mechanism that can investigate and track these agents. While we welcome the cancellation of problematic rehiring contractors, we are afraid that workers in the midst of registration may be again victimised by this move.

Renewal: The migrant working visa renewal process is equally riddled with cheating, a lack of transparency and little accountability by agents and employers. Most migrants have little idea of how this opaque process works. Passports are often illegally held by employers and whether their visas are renewed or not is out of the beyond the worker’s control.

Employer bondage and exploitation: The past Malaysian government’s hiring policy, which now needs to be reviewed by the new government, requires an employer’s consent for workers to change employers.

This inflexibility is particularly problematic in cases of exploitation, intimidation and physical violence where workers have no choice but to abscond and become undocumented. This is exacerbated where workers’ passports have been illegally retained. This system, which resembles the widely-criticised kafala system practised in Gulf countries, provides little option to seek redress for workers in this situation, particularly with the overhanging threat of deportation.

Amnesty blacklisting: The 3+1 amnesty programme, which blacklists workers for five years, further discourages them from using the amnesty system and thus forces them to become undocumented.

Border enforcement: Documented corruption and inefficiency within border enforcement agencies add to the problems faced by migrant workers, benefiting from the activities of the accountable recruitment industry and providing little relief or assistance when things go wrong.

Recruitment debt: Many migrant workers believe the promises made to them in their countries of origin by agents and employers. They borrow huge sums from syndicates and moneylenders to finance the initial migration costs. This debt bondage is exacerbated by the illegitimate substitution of contract terms, arbitrarily driving down wages and conditions and imposing unaccountable wage deductions, making repayment increasingly difficult. Sending people home in such circumstances is putting many workers at risk, and this needs to be clearly addressed.

To ensure that all labour migration matters are handled in a way that gives dignity and respect to migrant workers, we demand a holistic solution based on the following recommendations:

Migrant workers play a huge part in securing economic growth for Malaysia and will still be needed in years to come by various industries. The government must play a more active role in educating the Malaysian people that migrant workers are not their enemies or the cause of their own financial or employment problems.

Migrants are here because the Malaysian government, employers in formal and informal sectors and agents opened spaces for their work. So how can migrants be 'illegal'?

No person is illegal. We have always been keen to discuss these matters with all appropriate authorities to find the best solutions. This is a good time for the new government to take stock of what the real situation is and determine what possible solutions might be, before taking any actions.

Accordingly, migrant communities and civil society organisations concerned about migrants’ rights request an urgent meeting with the home minister and human resources minister to discuss and propose comprehensive, rights-based solutions on these and related issues.