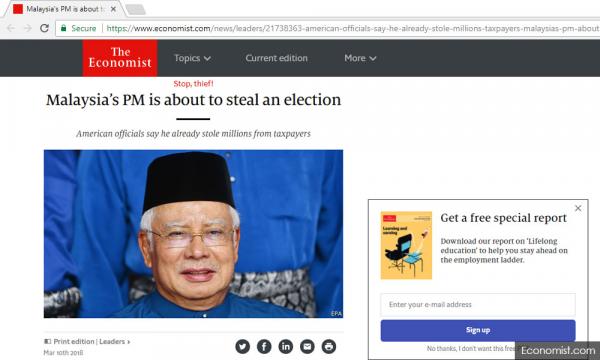 Much has been said of 1MDB and stolen funds, hence I do not wish to add any further.
The same cannot be said for His Excellency’s comments on Malaysia’s recent re-delineation exercise.

First, His Excellency states that “the redrawing of electoral boundaries to account for population growth” does not amount to rigging the system and would “imply that numerous democracies are guilty of the same charge”.

With respect, that misses the entire point of The Economist’s report – it was how the re-delineation was conducted (with allegations of malapportionment and gerrymandering) which lends credence to a rigged system, rather than the fact that it was done.

Certainly, nobody will argue that re-delineations are part and parcel of democratic countries.

His Excellency, unfortunately, provided no response to the facts and figures presented in the report. If he were to analyse them in detail, they, in fact, show that the Election Commission had failed to take into account population growth by condoning or aggravating malapportionment.

Super-sized constituencies, gerrymandered seats and voting systems open to abuse have been highlighted. Perhaps a more fact-based response to these points would be more helpful than ad hominem statements that The Economist “reeked of an arrogant colonial mindset”.

Second, His Excellency states that the re-delineation was “proposed and implemented by the independent Election Commission and subsequently approved by the judiciary”.

This is untrue - none of the courts has held that the Election Commission's re-delineation proposals had complied with the Federal Constitution or democratic principles.

These cases were dismissed on a narrow technical point i.e. it was for Parliament, not the courts, to determine the validity or otherwise of the re-delineation proposals.

On the contrary, the Kuala Lumpur High Court in a case brought by the Selangor state government had held that the allegations of malapportionment and gerrymandering in Selangor “have been made out, to the extent that they are supported by credible evidence and to the extent that they have not been specifically refuted by the respondents” [see para 17 & 18 of judgment].

These allegations were elaborated by the judge as follows [see para 19 of judgment]:

(i) the ratio of the largest to the smallest parliamentary constituency in Selangor had worsened from 3.29:1 to 4.05:1, whilst that of state constituencies had also deteriorated from 3.70:1 to 4.39:1.

(iii) the transfer of voters has increased the number of safe and marginal seats for the ruling BN coalition.

As to an “independent Election Commission”, I think a recent academic report which ranked Malaysia 142nd out of 158 countries in terms of electoral integrity speaks volumes on whether this is true.

Your Excellency, I am sure you care for the thousands of young Malaysians currently studying in the UK. They will fly back to this country one day and hopefully participate in the nation-building process by voting. I only wish that – come that day – the value of their votes will matter and that they will be proud to call Malaysia a truly functioning democracy.

Let’s make that happen, shall we?

The writer was part of the legal team that represented the Selangor government in the re-delineation legal challenges.