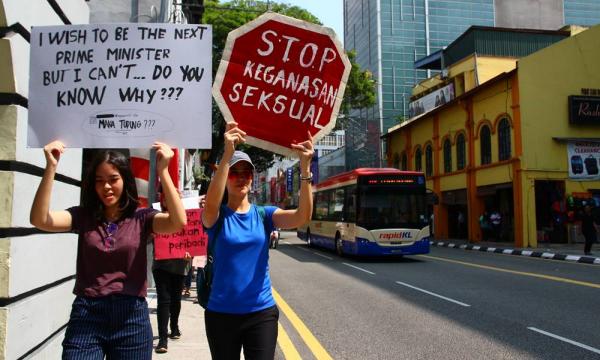 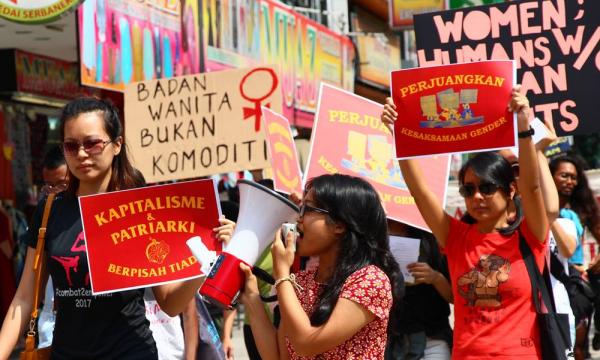 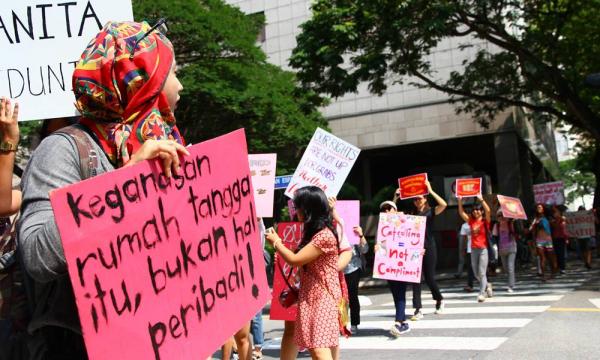 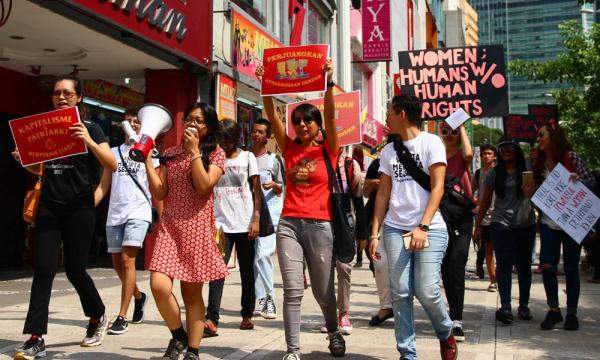 The Joint Action Group for Gender Equality (JAG) stands in solidarity with young women and allies under attack on Twitter as they share comments and contents in conjunction of the Perarakan Hari Wanita (#WomensMarchKL) event in Kuala Lumpur on Saturday, March 11, 2017. We denounce in the strongest term all forms of malicious, sexist and misogynistic harassment against women and trans-women, whether perpetrated online or offline.

The peaceful event was live Tweeted, with photos, and their Tweets were widely shared. The event itself had an energetic turnout with mostly young participants, and the messages they carried, become targets of relentless attacks designed to disempower them.

Among the participants who received the most intense attacks is a teenage girl who carried a placard: “I wish to be the next Prime Minister but I can’t... Do you know why??? (Speech bubble: ‘Mana tudung?’)”. The teenager is reportedly extremely affected by the trolling and insults directed at her. Significant attacks were also targeted against those who carried placards in support of trans-women as well as body shaming of at least one participant.

The march was held in conjunction of International Women’s Day (IWD), historically a day where women, in all our diversity and all over the world, hold demonstrations to demand for equal rights and an end to gender discrimination.

Today, the Internet has become a key space to facilitate IWD and the exercise of women’s fundamental rights to express thoughts, to form networks and communities, to access critical information and to mobilise for change.

It could not be emphasised enough that #WomensMarchKL is a legitimate approach, recognised under the Federal Constitution and international human rights standards, for the exercise of women’s fundamental rights to express, assemble and associate.

The positive and empowering expressions of women of their experiences at the #WomensMarchKL quickly became bad excuses for bad behaviour. A group of people decided that #WomensMarchKL have too much influence and made a concerted effort to silence, belittle and discredit the movement, commonly known as a ‘trolling’ tactic.

Troll messages are harmful, more so when they occur in mass quantity, and includes anything from sending constant derogatory and belittling messages, and threats. These acts are deliberate forms of gender-based violence.

The attacks and harassment in effect impede women’s right to freedom of expression, public participation and privacy by creating a hostile online environment in which they do not feel safe to express themselves. While the attacks are manifested online, the impacts and harms of such acts extend to offline lives of women. These include psychological harm, harm to reputation, invasion of privacy, and censorship.

While online harassment and attacks may happen to all users in differing ways, girls, women and trans women are often disproportionately targeted. Such incidents of gender-based online harassment rest on existing structural inequalities and are characteristics of a strongly embedded patriarchal system.
The online attacks by trolls against young women emphasises the more than ever need to for us to speak up and condemn any misogynist online attacks and harassment aimed at preventing the creation of a safe space for women online and offline. As individual activists and friends of JAG, we urge you to post solidarity messages on Twitter using the designated emoji to:

Endorsed by the Joint Action Group for Gender Equality (JAG):