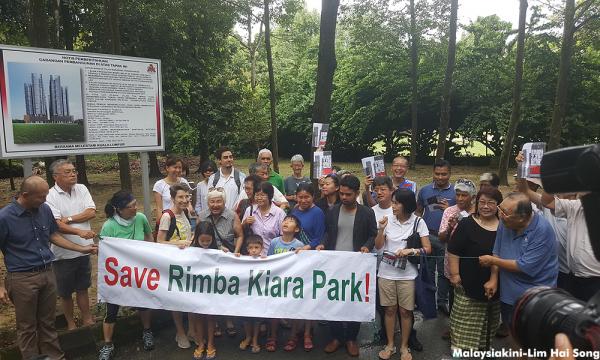 “The quality of life that TTDI residents have grown to appreciate will definitely decline with this reverse decision by DBKL,” notes Hafiz. “The existing plot ratio of 1:60 to a whopping 1:979 is detrimental to the idyllic lifestyle we’ve grown to love.”

The open spaces of Bukit Kiara, TTDI, and Taman Rimba Kiara parks are designated as green lungs according to the Kuala Lumpur City Draft Plan 2020. There are also allocations for a church and a Buddhist temple next to the existing Hindu temple at the proposed project site which is also designated as ‘Public Open Space’.

“We’re only asking that Taman Rimba Kiara remain an open space, which has been earmarked to be gazetted as a public park,” maintained Hafiz.

According to Hafiz, the TTDI residents continue to support the building of affordable housing, popularly known as rumah panjang, by DBKL without involving private developers.

“The provision of reasonable housing facilities to the former workers and their families of a rubber plantation company is the government’s responsibility,” asserted Hafiz. “The site was part of the Bukit Kiara land which was acquired under the National Land Code from the plantation company.”

TTDI residents have expressed their frustration at the turn of events as two mass open protests, over 5,000 signed petitions delivered to the mayor, protest letters, and widespread media coverage seem to have fallen on deaf ears.

“Although DBKL claims to be adhering to the so-called Rule 5, it’s now quite obvious that the stipulation is superficial and a deceptive process to proceed with the development order,” disputed Hafiz.

TTDI residents want DBKL to withdraw the project and appeal to preserve and maintain the proposed side as a public open space and to proceed with the gazetting of Taman Rimba Kiara.