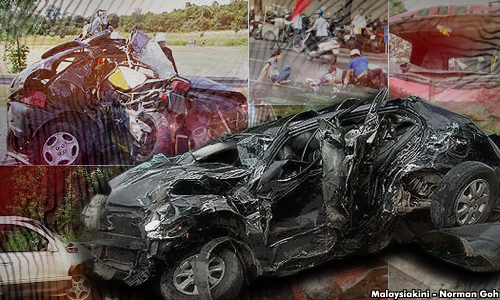 Most Malaysians are unclear about insurance covers for motor vehicles, let alone for boats that ferry passengers.

A good understanding of how insurance works on our roads is necessary to ensure boat passengers are also adequately covered.

I am not in favour of using the word ‘protection’, which is favoured by insurance companies, as it gives a false sense of security.

Real protection comes from safer roads, weather, vehicles, equipment and drivers, and not from insurance policies which few would read or could understand fully.

I would opt to travel in a safe vehicle without insurance cover rather than a fully insured unsafe jalopy.

At best, insurance companies could only compensate the victims partially and not replace what was lost.

It is worthwhile to examine closely the various types of insurance that cover passengers in public service vehicles, such as taxis, tour vans and buses.

Basically, there are three main types.

Firstly, life insurance, which insurers pay out in the event of the insured’s death or permanent disablement, caused by illness or accident.

Such insurance policies are overwhelmingly bought by the insured and in rare cases by a company on a key partner who is crucial to the business.

Secondly, personal accident insurance (PAI) cover, which can be for a year or short term, such as travel insurance.

PAI normally includes cover for medical expenses, which is incurred by most accident victims, more than claims made for death or loss of a limb or eye.

But the medical expenses cover is often overlooked and victims would have to top up with his or her own money if treated in private hospitals for severe injuries.

The third cover is public liability, which few companies bother to insure.

In Malaysia, the law requires all motor vehicles to be insured for third party injuries, and all public service vehicles for passenger liability.

For example, if a tour van landed in a monsoon drain and no other vehicle was involved in the accident, the driver was clearly at fault.

If the injured filed a civil suit, they will have to wait several years before they are awarded compensation by the court.

It will be hard for locals to wait, what more if they are foreigners. Moreover, it is normal for such cases to be postponed several times.

But if a runaway lorry were to crash into the van, those injured would have to sue the lorry driver at fault.

It would be a fruitless exercise if the vehicle was a ‘lori hantu’ (unlicensed lorry), without third party insurance cover.

In Malaysia, large numbers of people are driving or riding motorcycles without licences, and their vehicles without road tax and insurance.

Most vehicles licensed under ‘hire & drive’ are also not insured for legal liability to passengers when used for chauffeur-driven services.

Taxis and buses that are insured for passenger risk cover are required to adhere strictly to the terms and conditions stipulated in the insurance policy.

For example, there is no insurance cover if the vehicle was driven under the influence of drugs or alcohol.

In the event of an accident, drivers are required not to admit fault but hardly anyone knows this.

Drivers of tour vans and buses should be told and reminded that they should not make police reports on their own, without first consulting a superior well-versed on insurance requirements and writing police reports.

Should the insurance company choose to repudiate claims when terms and conditions are breached, it will not help the vehicle owner and driver, and least of all the injured victims.

Cases can also be further complicated when accidents are caused by vehicles that fled the scene, leaving no trace of their identity, such as the wheel that flew off from a passing lorry and killed a woman in Manjung, Perak.

It would be a good idea if more vehicles are fitted with dashboard cameras and even one for the rear. Apart from recording offences, it can also aid navigation.

If the authorities pay for offences captured by these cameras, our roads would be a much safer place.

Insurance companies should champion this as it would lead to fewer accidents and claims.