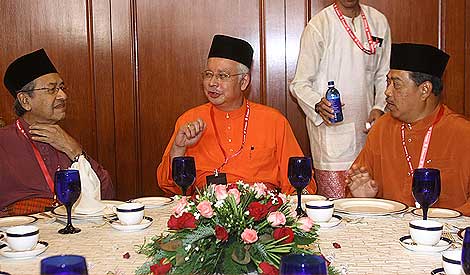 COMMENT | In the next general election, we could expect the return of three former prime ministers as candidates in their respective constituencies: Dr Mahathir Mohamad in Langkawi, Muhyiddin Yassin in Pagoh, and Najib Abdul Razak in Pekan.

Among the three, Mahathir is a constant, Muhyiddin the most expected, and Najib the most impossible.

We know this by the intentions and actions of the three. Mahathir has openly stated that his party, Parti Pejuang Tanah Air, will be contesting up to 120 seats in the next general election – and this would undoubtedly include his candidacy.

Muhyiddin has told his party Bersatu that they are destined to make a comeback to take what was theirs. Najib, being plagued by his court cases, has never discounted the fact of a return and has always hinted that those who came out short would always have a chance to reinvent themselves – for him, it was “Bossku”.

Their quiet movements are also telling. It is an accepted rule in politics that you stand a higher chance of being re-elected and elevated if you had held a high position in the incumbent government. It makes sense, therefore, that Muhyiddin was appointed the National Recovery Council chairperson.

There have also been rumours that Najib was...